Rabat – At least 7,000 seasonal female farm workers from Morocco will be recruited by Spain for the next agricultural campaign, which will take place in the province of Huelva, southern Spain, in 2018, reported AFP.

The terms of this agreement were concluded between representatives of the Spanish producers and those of the National Agency for the Promotion of Employment and Skills (ANAPEC), who oversees the recruitment phase.

“In the  light of recent discussions we had with the Spanish employees, this estimate will be certainly revised upwards,” said Anouar Alaoui Ismaili, director of marketing, communication, and cooperation at the ANAPEC.

“The 2018 recruitment campaign has not been officially launched… discussions are underway,” he added.

Once selected, the beneficiaries will receive assistance with administrative documents, including passports and visas, but they will be required to pay the fees.

The successful candidates will leave for Spain with contracts of an average duration of three months and will receive a daily remuneration of EUR 39.48 (MAD 432.44).

The Spanish employer will take care of housing and transport from Tangier, from where the candidates will leave to begin the campaign. At the end of the contract, the workers will return to Morocco, with the possibility to apply again.

This flow of workers between the two countries is the result of a bilateral agreement signed in Madrid in July 2001 between Spanish authorities, the Moroccan Ministry of Employment, and ANAPEC.

The Spanish countryside is home to workers from several parts of the world. Most workers migrated to Spain from Morocco, Romania, Bulgaria, Lithuania, Poland, Portugal, Bolivia, Colombia, Ecuador, Ukraine, and Pakistan, along with others from sub-Saharan African countries.

According to a report issued last year by the Spanish Coordinator of Organizations of Farmers and Ranchers (COAG), the agricultural sector in Spain depends on more than 200,000 migrant workers, with a large number of them from Morocco.

There are about 71,587 Moroccan workers in Spain’s agricultural sector, as well as 59,830 Romanians. Both groups combined account for more than half of the total workers in the sector.

The study notes that Spain is a powerhouse in the production and marketing of food in Europe, and it would not have accomplished this level of agricultural production without the labor of more than 200,000 foreign workers. 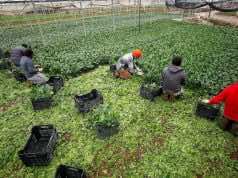 Ministry of Labor: Moroccan Agricultural Workers will Depart for Spain in April