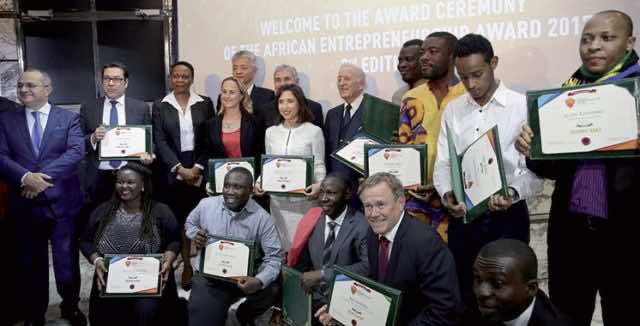 Rabat – The BMCE Bank of Africa Group has just revealed the list of winners of the third edition of the African Entrepreneurship Award.

Among the 40 finalists selected for the Boot Camp that took place in Casablanca from December 6 to 10, 12 winners from nine African countries were announced by a presidential jury, chaired by the Moroccan businessman and chairman of BMCE Bank of Africa, Othmane Benjelloun.

This award, with an annual envelope of USD 1 million, is intended to reward projects with social and sustainable impact in the three program areas, namely education, environment and uncharted fields.

To the BMCE of Africa group, the African Entrepreneurship Award initiative seeks to promote entrepreneurship through business development and job creation, thus contributing to the improvement of the quality of life of African communities.

According to the organizers, the 2017 edition of the African Entrepreneurship Award has reached more than 12,000 project proposals from 132 countries, including all the 54 African countries, and hosted more than 112 entrepreneurs, accompanied by more than 180 mentor from Africa, Europe, Asia, and North America.

Louise Williamson from South Africa was awarded the first prize of USD 100,000 in the education category, for the production of sustainable fuel ovens for schools in remote areas.

Awards also went to Adan Mohammed from Kenya for the animal food production from insect and larvae, to Sylvester Mujakperuo from Nigeria for the processing of used paper and cardboard into new paper products, and finally to Kwame Ababio from Ghana for the optimization of the cultivation and exploitation of palm oil.

In the uncharted fields category, the prize went to Flavien Simo from Cameroon for his aquaponics production project that combines fish farming and plant breeding, and to Paul Bartels from South Africa for his project that develops waterbok community fire-fighting carts.

The pioneer award of USD 50,000 was attributed to Meryam El Ouafi from Morocco for creating a prototype of new irrigation technology for optimizing water consumption.

The same prize went to Badr Idrissi, also from Morocco, for creating intelligent drones to combat illegal fishing, to Geoffrey Ssekatawa from Uganda for the collection and recycling of lubricants, and to Christelle Kwizera from Rwanda for a project that purifies and distributes drinking water to vulnerable communities.