Rabat - Morocco and the Republic of South Africa are two important African countries that share the same vision on an Africa that must take responsibility for itself, solve its problems and address its challenges, said on Tuesday Minister of Foreign Affairs and International Cooperation Nasser Bourita. 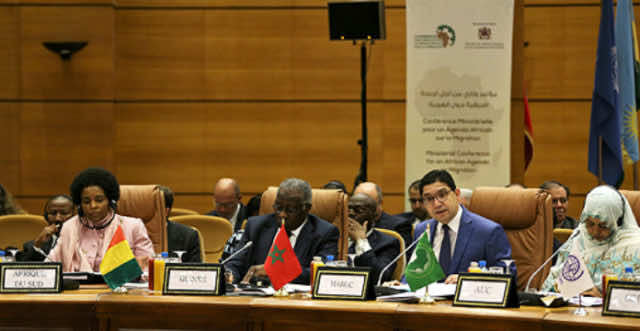 Rabat – Morocco and the Republic of South Africa are two important African countries that share the same vision on an Africa that must take responsibility for itself, solve its problems and address its challenges, said on Tuesday Minister of Foreign Affairs and International Cooperation Nasser Bourita.

Speaking during a press briefing after his meeting with South African Minister for International Relations and Cooperation Maite Nkoana-Mashabane, who is taking part in Rabat in the Ministerial Conference for an African Agenda on Migration, Bourita said the role of Morocco and South Africa remains pivotal regarding issues related to peace, development and migration.

Bourita noted that his talks with the South African official follow the important and historic meeting which took place late November in Abidjan, on the sidelines of the 5th African Union-European Union Summit, between HM King Mohammed VI and President of the Republic of South Africa, HE. Jacob Zuma.

The Minister recalled, on this occasion, that the two Heads of State had agreed, during this meeting, to open a new page in the relations between the two countries, strengthen diplomatic interaction and explore cooperation topics.

The goal of today’s meeting is precisely to move forward in this direction, Bourita said, stressing that the frank and cordial meeting he had with the South African minister was an opportunity to coordinate action by the two countries on crucial topics as migration.

When Morocco and South Africa coordinate their efforts in the service of the African Agenda, Africa will have a stronger voice and greater influence on multilateral debates, said Bourita, noting that the African Union is the appropriate framework “to coordinate our positions”.