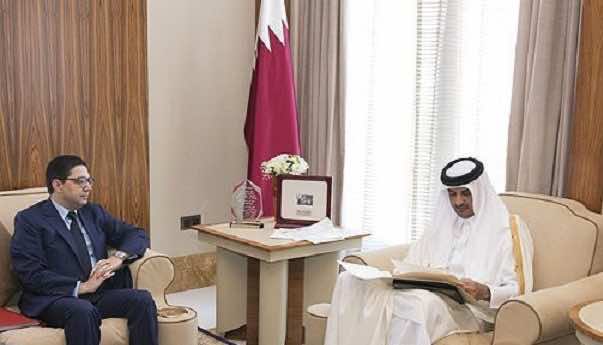 In the message, King Mohammed VI underscored the bilateral relations between Qatar and Morocco and the means to develop them in order to meet the aspirations of the brotherly peoples and serve common interests, according to Qatar’s news agency (QNA).

Bourita has also conveyed to Sheikh Tamim bin Hamad al-Thani the greetings of King Mohammed VI and his wishes of further progress and prosperity for the Qatari people, added the state’s news agency.

Emir of Qatar also sent his greetings to Morocco’s monarch and his wishes of further progress and prosperity to the Moroccan people.

King Mohammed VI’s last official visit to Qatar dates back to November 12, 2017. The visit was the first of its kind since the beginning of the Gulf crisis.

King Mohammed’s visit to Qatar was welcomed by both Qatari people and the state media. Al Arab, a local daily introduced King Mohammed VI as the first “blockade breaker” after he landed in the Gulf country in November 2017 amid a Saudi-led blockade.”

Qatari citizens and their media have enthusiastically greeted King Mohammed VI for his special visit, which intended to discuss the “excellent relations between the two brotherly countries,” according to Maghreb Arab Press (MAP).

Before landing in Qatar, the monarch had paid a friendly and working visit to the United Arab Emirates (UAE) on November 7.