Rabat - Authorities at Casablanca’s Mohammed V Airport arrested a Nigerian national on Saturday for his alleged involvement in cocaine trafficking.

Rabat – Authorities at Casablanca’s Mohammed V Airport arrested a Nigerian national on Saturday for his alleged involvement in cocaine trafficking.

The 35-year-old suspect was in possession of 13 capsules containing 280 grams of cocaine concealed in his underwear, according to a statement by the General Directorate of National Security (DGSN).

The suspect arrived in Casablanca on a flight from Sao Paulo.

Officers suspected the individual was carrying other capsules of cocaine in his stomach. The police took him to Ibn Rochd University Hospital’s emergency services in Casablanca for further medical examination. The Nigerian national was placed in custody for further investigation to determine the full circumstances of the case. 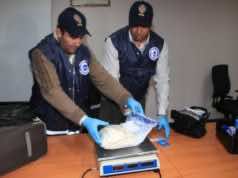