Rabat - Morocco’s bid to join the Economic Community of West African States (ECOWAS) has found new institutional support. Regional business and commerce institutes, including the Morocco-based, think tank and policy organization Amadeus Institute, announced on Friday in Abidjan the creation of a working group - the Regional Alliance for monitoring the Accession of Morocco to ECOWAS - to promote and facilitate Morocco's membership in the 15-member economic forum. 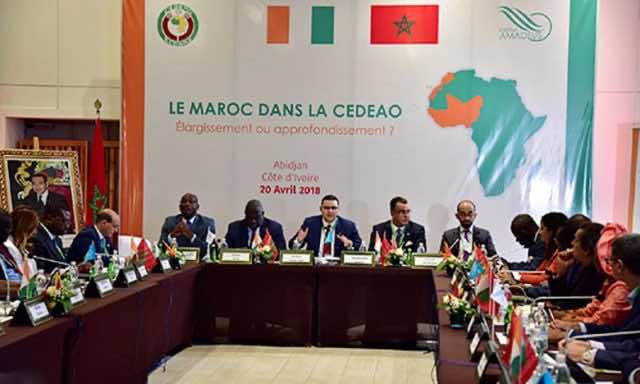 Rabat – Morocco’s bid to join the Economic Community of West African States (ECOWAS) has found new institutional support. Regional business and commerce institutes, including the Morocco-based, think tank and policy organization Amadeus Institute, announced on Friday in Abidjan the creation of a working group – the Regional Alliance for monitoring the Accession of Morocco to ECOWAS – to promote and facilitate Morocco’s membership in the 15-member economic forum.

A joint statement issued by Amadeus Institute, the Agricultural and Rural Foresight Initiative (IPAR) of Senegal, and the Ivorian Center for Economic and Social Research (CIRES) announced the creation of the alliance during a workshop held on Friday as part of the stakeholder conference under the them “Morocco in Ecowas.”

The joint statement added that this collaborative approach aims to ensure that “civil societies, employers’ representatives, trade unions can appropriate the challenges of this membership in an informed and objective way.”

The statement also noted that the initiative will seek to “reflect on the economic complementarities, issues of the protection of the movement of people and the macroeconomic impacts and consequences on logistics flows and trade west Africa.”

The alliance members called on the ECOWAS member states and Morocco to be “ingenious in defining an open negotiating process to all actors in order to reinforce” the spirit of ECOWAS to serve the interest of all parties.

Negotiations for Morocco’s ascension need to be organized in “transitional phases, capable of preserving the acquis communautaire in a 16-member ECOWAS,” read the statement.

Commenting on the bid, Tanon A. Felix, Adviser of Ivorian President Alassane Ouattara, told Le360 on Sunday that Cote d’Ivoire is supportive of Morocco’s desire to join ECOWAS.

During the 52nd ECOWAS Summit held in December 2017, Ouattara confirmed that the organization agreed in principle on Morocco’s admission; however, an impact study of this decision is in order.
The recently completed stakeholder conference held in Abidjan was organized by the General Confederation of Enterprises of Morocco (CGEM) in collaboration with the Ivorian Center for Economic and Social Research (CIRES). The symposium convened politicians, economic advisors and academics.

Following Morocco’s readmission into the African Union in January 2017, King Mohammed VI informed Ellen Johnson Sirleaf, President of Liberia and Chairperson ECOWAS, of the country’s desire to join the regional economic community as a full member.