Rabat - Nearly a month after publicly announcing its support for Morocco’s 2026 World Cup bid, the South African Football Association (SAFA) has rescinded its support, claiming that it has not decided whether to support the African bid or the North American joint bid. 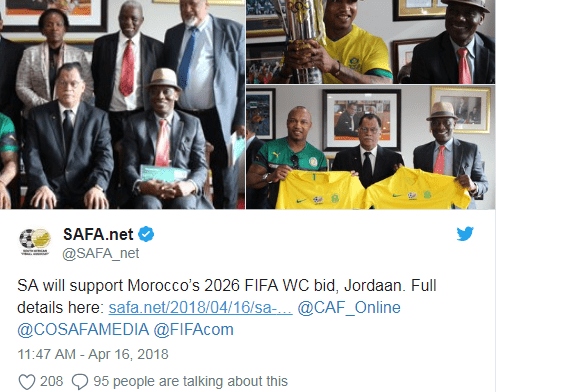 Rabat – Nearly a month after publicly announcing its support for Morocco’s 2026 World Cup bid, the South African Football Association (SAFA) has rescinded its support, claiming that it has not decided whether to support the African bid or the North American joint bid.

“The decision whether to support Morocco or the USA FIFA World Cup 2026 bid is for the SAFA NEC to take,” reads a statement by the federation.

The statement added that the federation received presentations from both parties competing to host the 23rd tournament in 2026.

“SAFA wants to reiterate that no decision has been taken at this stage on the matter on who to support,” said the statement, emphasizing that none of its officials announced the federation’s position on any bid.

The statement contradicts an April post on the official federation page, which has since been deleted from the website. However, a tweet posted by the federation confirms that SAFA’s original support for the Moroccan bid.

Morocco World News reported on South Africa’s support for the bid on April 16, quoting statements of the SAFA president, Danny Jordaan, who promised Morocco’s bid committee that he will “personally lobby” Africa’s football leaders before the vote.

Jordaan also promised the Moroccan bid that he will be personally engaged in attracting support from the Council of Southern Africa Football Associations (COSAFA).

“It is an old myth that Africa doesn’t have the capacity and naysayers should stop using the political argument. Africa hosted the best FIFA World Cup ever and with good support, Morocco can emulate South Africa,” said the SAFA president.

“Would be a shame if countries that we always support were to lobby against the US bid,” Trump wrote, insinuating broader financial implications for nations with pro-Morocco federations.

The statement comes one month ahead of the big day, when 211 international football federations will gather in Moscow to vote for the host of the tournament.