Rabat - After announcing his retirement from soccer at the end of the season with his club AS Nancy-Lorraine, Youssouf Hadji is seriously thinking about continuing his football career off the field, and he is not excluding the possibility of returning to his homeland, Morocco. 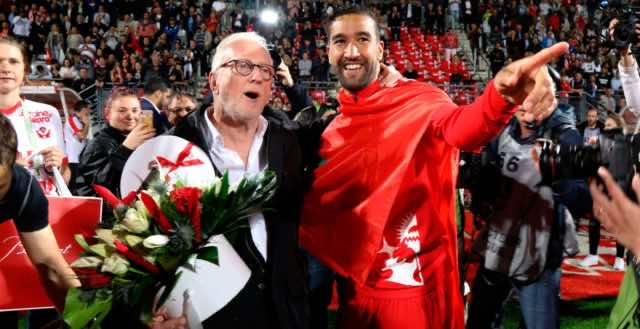 Rabat – After announcing his retirement from soccer at the end of the season with his club AS Nancy-Lorraine, Youssouf Hadji is seriously thinking about continuing his football career off the field, and he is not excluding the possibility of returning to his homeland, Morocco.

Three weeks ago, the former Atlas Lion publicly announced his decision to retire, after talking with his club, the staff and his teammates. He played his final game at Marcel-Picot against Orleans with a (3-0) win on Friday, May 11.

Hadji, 38, had scored 86 goals in 348 games and became the second highest scorer in the history of AS Nancy behind the sensational Michel Platini.

In a video published on AS-Nancy’s official website, the club said, “Youssef Hadji is now thinking about following his career, off the field.” The French-Moroccan spoke of his future, “As a player, it was my last match at Marcel Picot. After that, I’m going to stay in football as I can only do that. We will see the opportunities. I am fulfilled. In my career, I saw what I wanted to see. Now we will give room to young people.”

The Moroccan international football player may return to the Kingdom. “If I need sun, I’ll go to Morocco,” he joked. Hadji’s brother Mustapha Hadji is the assistant manager of the Atlas Lions.

“With the Moroccan selection like my brother? Yes why not. There are many things that can tempt me. If I can bring something thanks to the long career that I had, that’s what I think I will do,” he said.

Hadji also wore jerseys from Bastia, Rennes (twice), Al-Arabi and Elazigspor. Hadji will always be remembered as an iconic Atlas Lion who helped Morocco’s national team reach the finals of the African Cup of Nations in 2004.