Rabat - The citizens of Paris, France, witnessed a spectacular scene Saturday night. A Malian man saved  a 4-year-old child suspended from a balcony. His spontaneous act was filmed and has been seen millions of times on social networks. 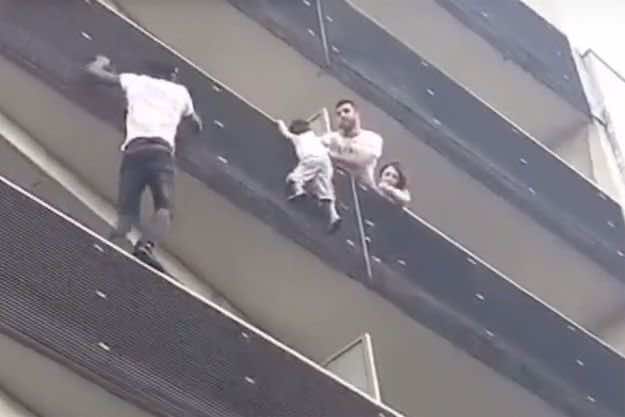 Rabat – The citizens of Paris, France, witnessed a spectacular scene Saturday night. A Malian man saved  a 4-year-old child suspended from a balcony. His spontaneous act was filmed and has been seen millions of times on social networks.

Amazed passersby saw Mamoudou Gassama climbing up what appears to be four stories with his bare hands, and in approximately 30 seconds reaching the child, who was suspended over a balcony, holding on with his hands.

The deputy to the Paris mayor tweeted, “The young man who saved a baby on Rue Marx-Dormoy by climbing three floors is undocumented, arrived from Mali in September. This is to remind the people who talk bad about the migrants all day long. Thank you Mamoudou Gassama.”

A little earlier, Paris Mayor Hidalgo had said of Gassama on Twitter: “Congratulations to Mamoudou Gassama for his bravery that helped save a child’s life last night, and I enjoyed talking with him today on the phone, to thank him warmly.”

“I saw a lot of people screaming, and cars honking,” explained the man who has been presented as a hero by many media outlets. “I went out, I ran to look at the solutions to save him, I managed to catch the balcony, I climbed like this and thank God I saved him.” The incident happened in the eighteenth arrondissement around 8 p.m.

The child’s father was taken into custody as part of an open investigation into neglect of parental responsibility in a case assigned to the juvenile protection brigade.

Gassama’s actions did not go unnoticed by French President Emmanuel Macron, who invited the hero on Monday to become a “naturalized Frenchman” and to work for the fire department, according to AFP.