Rabat - The holy month of Ramadan has inspired Nike. The American sportswear brand has collaborated with Lebanese designer Ali Chaaban on a project titled “Dusk to Dawn” to create a pair of Ramadan shoes. 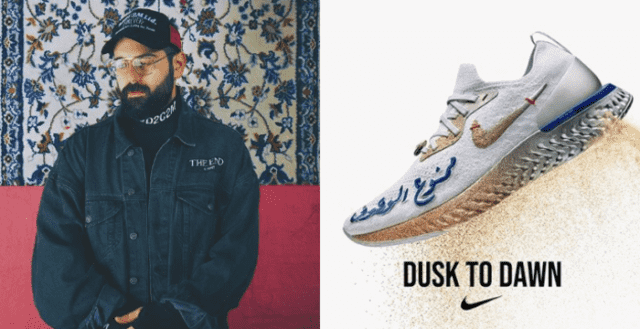 Rabat – The holy month of Ramadan has inspired Nike. The American sportswear brand has collaborated with Lebanese designer Ali Chaaban on a project titled “Dusk to Dawn” to create a pair of Ramadan shoes.

Nike and the 28-year-old artist designed an exclusive model with only 30 pairs to be won during the holy month. Unveiled on the first day of Ramadan, the new pair of basketball shoes is all over social media where people seem to be seduced by the new creation.

Another look at my “Dusk To Dawn” collaboration with @nike _ Only 30/30 pairs available from these Nike Epic Reacts. #NikeEpicReacts #DuskToDawnChallenge #RUNmadan

“I’m so happy to announce my Nike “Dusk To Dawn” collaboration is finally out. A shoe inspired by the streets of Lebanon, the [“mamnua al-waquf” (no parking)] symbolized the aesthetics of the streets and the meaning of never slowing down,” wrote Chaaban on his Instagram page with a picture of the shoe, offered in shades ranging from sand to blue to a touch of metallic gray.

“This is amazing,” “How to get a pair?” “These are SO nice. Wish there were more pairs to go around. Well done on the design,” commented fans.

After Lebanon’s 2006 war, Chaaban left his native country to pursue his passion for art in Kuwait, using it to tackle social and political issues. He has since showcased his work in several art galleries and exhibitions, including Beirut Art Fair 2017 and Galleries Week in Abu Dhabi.

In August, he first collaborated with Nike on a project highlighting the 1990s called “Summer of White,” featuring the artist Rayan Nawawi.

Chaaban also collaborated with Dolce & Gabbana in November 2017 on an ultra-trendy version of the white sneaker.