Rabat - Dozens of people gathered on June 16 to take part in a sit-in near the home of Polisario leader Ibrahim Ghali to protest against the separatist front’s violent crackdown on political dissidence and opposition. 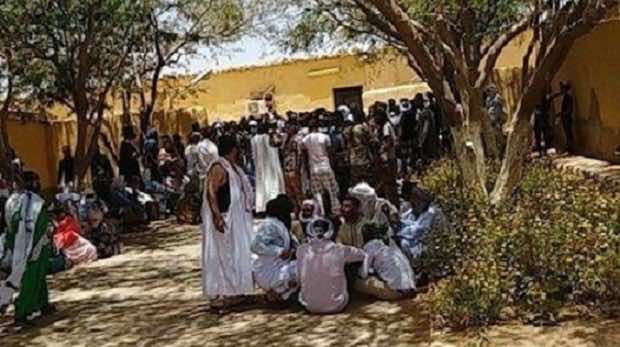 Rabat – Dozens of people gathered on June 16 to take part in a sit-in near the home of Polisario leader Ibrahim Ghali to protest against the separatist front’s violent crackdown on political dissidence and opposition.

Chanting anti-Polisario slogans, more than 60 protestors demanded an investigation into the hanging of a man whose body was found earlier this month, according to local sources.

It appears that the June 16 event is the culmination of political tensions within the Tindouf Camps in recent months, particularly between pro and anti-Polisario activists.

The man whose body was found in early June was an inmate at the Dheibya prison facility, where he was being detained for his political activism and overt criticism of the Polisario Front. According to friends and relatives, who organized the June 16 sit-in, he was a renowned anti-Polisario activist in the region and was one of the harshest critics of the movement in the Tindouf camps.

While the separatist front’s official narrative claims the man’s death as a suicide, his circle of friends and family said they have evidence that suggest a political assassination. They believe the man was killed by secessionists inside the Dheibya prison, who then “masked the circumstances of his death” and made it look like a suicide.

An anonymous source told Morocco World News that this is not an isolated incident, as some political dissidents, who have managed to escape the Tindouf camps, have also spoken about human rights abuses and violence towards dissidents. The same source said that this weekend’s event comes as further proof that the separatist front is not the legitimate and unanimous representative of the Sahrawis, as is widely believed in the international community.

Prior to last weekend’s sit-in, representatives of the Yagout tribe, of which the hanged victim was a member, had sent a written appeal to UN Secretary-General Antonio Guterres, asking the international community to condemn the acts of violence and murders committed against political dissidents in the Tindouf Camps. Claiming in their letter that they know who the “murderers” are, they demanded that cases of political violence in the Tindouf Camps be taken to the International Criminal Court.

“The United Nations and human rights watchdogs such as Human Rights Watch and Amnesty International must open an investigation to clarify the circumstances of this alleged murder and shed light into it,” the source concluded.