Rabat- Israeli fans have denied allegations that Moroccan fans tried to snatch their flag at Morocco-Portugal World Cup match on Wednesday, saying that the media reports were “fake news.” 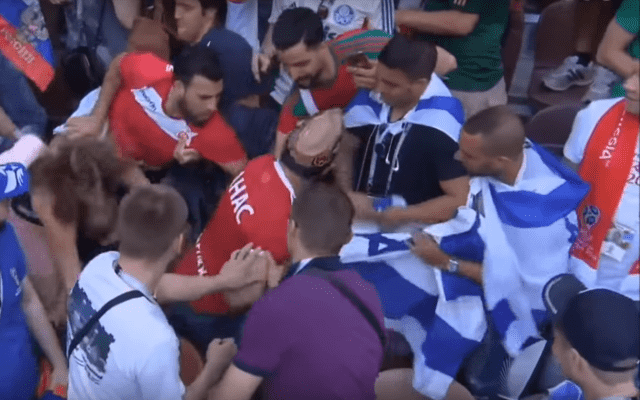 Rabat- Israeli fans have denied allegations that Moroccan fans tried to snatch their flag at Morocco-Portugal World Cup match on Wednesday, saying that the media reports were “fake news.”

Following the end of the World Cup match between Morocco and Portugal on Wednesday, a video showing Moroccan fans tugging at an Israeli flag held by Israeli fans in the stands led viewers to assume that the Moroccan fans were attacking them.

Several international news outlets reported about how Morocco’s 0-1 defeat to Portugal had Moroccan fans lash out at Israelis and attack their flag.

Some even suggested that the fans’ display was to condemn the Gaza massacre where dozens of Palestinians were killed by Israeli soldiers.

However, the Israeli fans told Israeli television channel Kan that Moroccan fans were very friendly towards them and the fight shown in the footage was over the Atlas Lions’ captain Mehdi Benatia’s jersey.

After the match ended, Benatia threw his jersey to the Moroccan fans close to Israeli fans who clarified that Moroccan fans were tugging on the flag to reach the jersey.

“There was a great atmosphere during the game. Everyone welcomed us,” one of the fans told Kan, reported the Times of Israel news site.