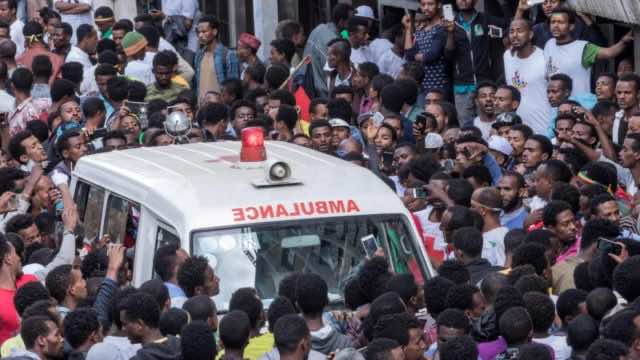 Rabat- After Saturday’s brutal grenade attack on reformist Prime Minister Abiy Ahmad’s rally, reports of fatalities have surfaced. Ethiopian Health Minister Amir Aman confirmed that 2 people have died, and 156 were wounded, of which 5 are in critical condition.

Nine police officials, including the deputy head of Addis Ababa police commission, were arrested for negligence that led to the serious security lapses.

Thirty suspects have reportedly been arrested for alleged involvement in the attack. However, no groups have claimed responsibility.

The new reformist leader, who took office in April, had finished a speech to a densely packed crowd of tens of thousands at Meskel Square, when according to witnesses, an unidentified assailant wearing a police uniform attempted to hurl a grenade at the stage.

Ahmad said after the attack that there are those that seek to undermine the rally, “The people who did this are anti-peace forces. You need to stop doing this. You weren’t successful in the past and you won’t be successful in the future.”

Ethiopia’s new prime minister has vowed to reform the country. Among his proposed reforms are more transparency in governance, the release of thousands of political prisoners arrested in a 2015 crackdown, opening state-owned companies to domestic and foreign investments, unblocking websites and channels, and honoring the 2000 peace agreement with Eritrea.