Rabat - They were Belgium’s savers. In the Belgium-Japan game Monday, July 2, Moroccan-Belgian players Marouane Fellaini and Nacer Chadli have reversed the trend by bringing Belgium into the quarterfinals of the World Cup. 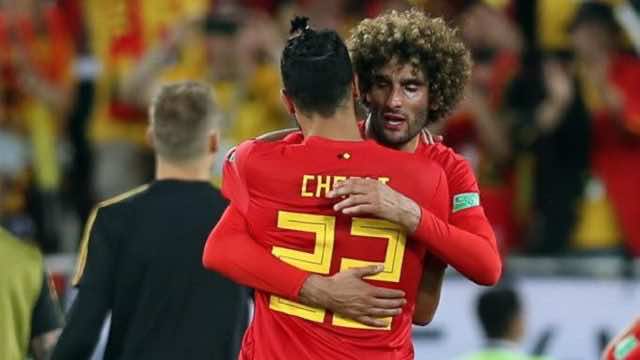 Rabat – They were Belgium’s savers. In the Belgium-Japan game Monday, July 2, Moroccan-Belgian players Marouane Fellaini and Nacer Chadli have reversed the trend by bringing Belgium into the quarterfinals of the World Cup.

What a game! Considered one of the World Cup’s favorite teams, Belgium was shaken by Japan for sixty minutes. Samurai Blue, as Japan’s team is known, was clearly leading the game, scoring a double in the second half of the match.

Close to elimination, Belgium’s Red Devils were quick to respond to their opponent. In the 69th minute, Jan Vertonghen opened the Belgians’ scoring on a particularly lucky move. Trying to score a long-distance with his head, the defender found an unlikely angle to clobber Japanese goalkeeper Eiji Kawashima.

With new momentum, the Belgian football players were unstoppable. Marouane Fellaini, who entered the field in the 65th minute, made an equalizer goal in the 74th minute.

Nacer Chadli, also of Moroccan origin, made the game’s final goal in the 94th minute, a spectacular ending that allows Belgium to move on in the competition.

“When I go to the field, I try to make a difference, to bring something more. I tried today, I brought it. I’m happy for the group,” said Marouane Fellaini.

As for Moroccan-Belgian winger Nacer Chadli, he played one friendly game with Morocco against Ireland in 2010, before switching to represent Belgium.

To qualify for the semifinals, Belgium will have to beat Brazil in the quarterfinals, Friday, July 6 at the Kazan Arena. The winner of that game will have to take on either France Uruguay.