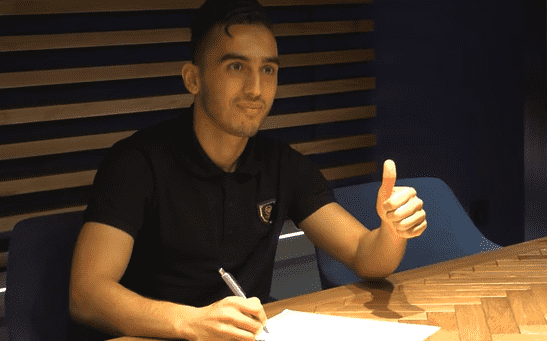 The Spanish team signed the Moroccan player for a three-year contract.

CF Malaga officially confirmed the news on its Twitter on Friday.

“@Bboulahroudd reinforces our midfield and becomes the first signing of the season! Welcome, Badr!” wrote the club.

Bouharroud landed in Costa del Sol, where he underwent medical checking on Thursday.

The Moroccan midfielder completed the contract for a reported fee of EUR 600,000.

The footballer spent his youth career with Morocco’s Fath Union Sport. The younger also represented Morocco at under-20 in the 2015 Toulon Tournament.

Boulahroud will join his Moroccan teammate Youssef En-Nesyri, who is currently playing for Malaga CF.

Boulahroud also participated in the African Nations Championship (CHAN2018), which took place in January in Morocco.

El Ahmadi is eyed by Saudi football team Ittihad Jeddah, while Achraf Hakimi has reached an agreement with Borussia Dortmund and are almost closing the deal for the loan of Hakimi.

For Ziyech, AS Roma are determined to convince his Dutch team Ajax for a deal over the Moroccan star.

No official announcement was made by both teams.