Rabat - Morocco and China expressed hope to enhance media exchanges and cooperation during a meeting convening Moroccan officials and a Chinese media delegation in Rabat on Thursday. 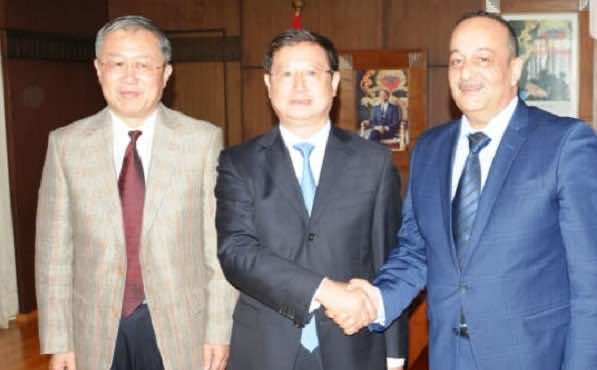 Rabat – Morocco and China expressed hope to enhance media exchanges and cooperation during a meeting convening Moroccan officials and a Chinese media delegation in Rabat on Thursday.

During the meeting, Moroccan Minister of Culture and Communication Mohamed El Aaraj held talks with Vice President of the Association of Chinese Journalists Hu Xiaohan.

During their meeting, the vice president of the Chinese media cooperation and the Moroccan official discussed ways to create a bridge between the two countries in the areas of media and communication.

Commenting on the delegation visit, El Aaraj told Maghreb Arab Press (MAP) that the visit is part of the strengthening of ties of cooperation between the two countries, which are “distinguished and strategic.”

El Aaraj also said that his ministry pledges to organize exchanges of visits for Moroccan and Chinese journalists.

The official also informed the Chinese journalists of constitutional and legal achievements in the fields of publishing and media.

The Moroccan ministry of communication is planning to create a Moroccan-Chinese joint committee to further reinforce bonds in the field of journalism.

The minister also emphasized that Morocco is expected to organize an international forum between China and the Arab countries, stressing the importance of strengthening cooperation in the media and cultural sectors.

Xiaohan, who led the Chinese delegation, said that the visit of Chinese journalists aimed at reinforcing relations between the two countries in the field of journalism.

He added that Chinese officials and media experts are interested in reinforcing relations between the two countries.

Prior to this visit, the Association of Chinese Journalists has made two official trips to Morocco since last year.

These visits, according to Xiaohan, mirrors “the interest in strengthening relations with our Moroccan counterparts.”

The association also addressed an official invitation to Morocco to participate in the “Belt and Road Initiative” forum in 2019.

Chinese Ambassador to Morocco Li Li alls attended the meeting between Morocco and the Association of Chinese Journalists. Morocco Allocates $21 Million in Emergency Aid to Save Media

Newspapers Roundup: The Stories that Made Headlines This Week in Morocco