Rabat - On Throne Day, Morocco’s Bank Al Maghrib announced it will issue a new commemorative coin with a value of MAD 250. 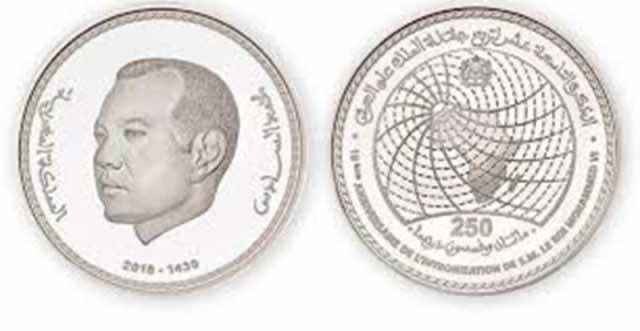 Rabat – On Throne Day, Morocco’s Bank Al Maghrib announced it will issue a new commemorative coin with a value of MAD 250.

The announcement came on the 19th anniversary of King Mohammed VI’s ascension to the throne.

The bank will begin selling its new coin on August 1 in its locations across Morocco and the Currency Museum in Rabat. The bank is setting the price of the coin at MAD 550.

The face of the coin features the figure of King Mohammed VI and the inscriptions “Mohammed VI” and “Kingdom of Morocco” in Arabic.

The reverse of the coin has the inscription “19th anniversary of the ascension of the King to the throne” in Arabic and French.

The governor of Morocco’s central bank, Abdellatif Jouahri, met with King Mohammed VI in Al Hoceima Sunday evening, and presented the monarch with statistics on the performance of the bank in 2017.

Jouahri emphasized that the domestic economy grew at a rapid rate last year. The local economy expanded by 4.1 percent, owing to good climatic conditions for agriculture and overall economic recovery.

Today in Tangier, the King was to chair a reception ceremony at Tangier’s Marchaine Palace at 2:15 p.m. to celebrate his ascension to the throne in 1999, according to a statement from the Ministry of the Royal House, Protocol, and Chancery on Sunday.