Rabat- Several Moroccan towns had their water cut off on Eid al-Adha and protested at water distribution offices.

By
Ahlam Ben Saga
-
Ahlam Ben Saga is a Cultural Studies graduate from university Mohammed V of Literature and Humanities in Rabat.
Aug 23, 2018
Spread the love

Rabat- Several Moroccan towns had their water cut off on Eid al-Adha and protested at water distribution offices.

Residents of several towns woke up on August 22, the Eid al-Adha holiday, to find that their water had been cut off without prior notice from their water supplier.

The affected towns included Tinjdad in the eastern Draa-Tafilalet region, Ait Milk in the southern Souss-Massa region, Taounate in the northern Rif Mountains, and Ksar el-Kebir in northwest Morocco.

On any other day, Moroccans in many regions of the country are obliged to patiently wait when the tap goes dry.

However, on Eid al-Adha (the festival of sacrifice), when people use more water than usual to clean up after the sacrifice, the lack of water becomes a crisis to many.

In rural areas or villages people rely on wells when tap water is cut off, however in cities there are no wells on which to fall back.

Eid al-Adha is the second of two Islamic holidays celebrated by Muslims worldwide, on the 10th day of Dhu al-Hijjah (the month of pilgrimage) in which the Hajj pilgrimage takes place.

On Eid, families gather together to share their joy after performing the morning Eid prayers and making the sacrifice by slaughtering a sheep or goat.

Demonstrating both anger and frustration for not being able to enjoy Eid to the fullest extent, dozens of residents in Taounate rallied in protest on Wednesday in front of the office responsible for water distribution, reported Moroccan newspaper Akhbar Al Yaoum.

The residents complained about authorities’ lack of action to fix the problem, especially since the region is home to a large reservoir dam, Al Wahda Dam.

Ksar el-Kebir residents protested the lack of water in their own way by hanging sheepskins on the gate of the water distributor in the region, Radeel. 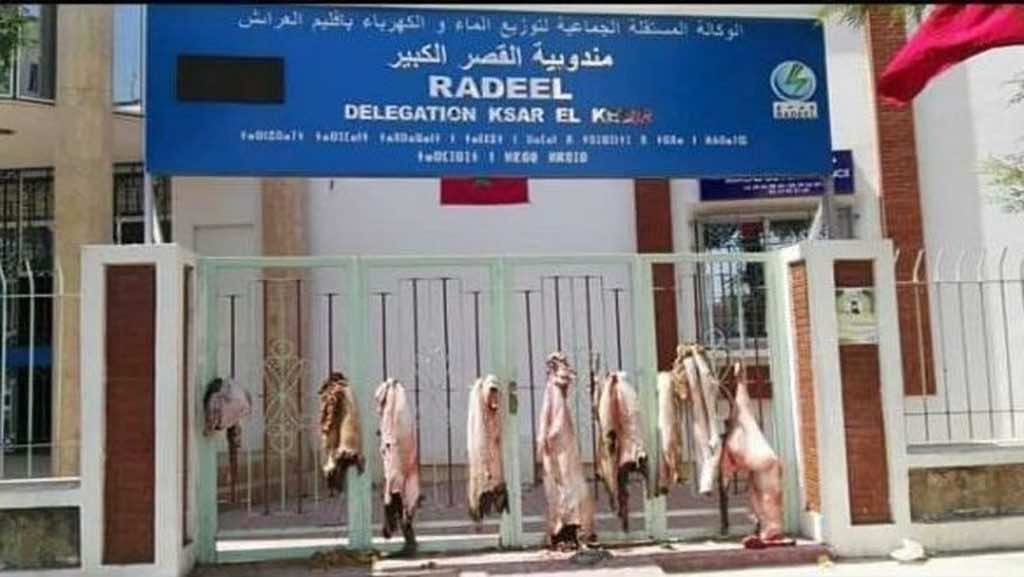 In the Draa-Tafilalet region, water is finally back on Thursday, the second day of Eid.