By
Tarek Bazza
-
Tarek Bazza is a journalist at Morocco World News with Master’s degree in Translation from King Fahd School of Translation in Tangier.
Sep 15, 2018
Spread the love

In June, Soluna announced the farm had a capacity to generate 900 megawatts of wind power.

Soluna’s strategic agreement with DMG Blockchain Solutions is in line with its clean and low-cost renewable energy.

“As we plan the first stage of development for our project in Morocco, we are thrilled to have a seasoned partner to galvanize our efforts to create the world’s first vertically-integrated blockchain computing company,” he added.

DMG is a blockchain platform that specializes in mining public blockchains and applying permissioned blockchain technology.

Researchers have found that solar and wind farms could actually bring rainfall and vegetation back to the Sahara Desert.

A group of scientists from the University of Maryland (UMD) conducted climate and vegetation model experiments to study the effects of solar and wind farms.

“Our model results show that large-scale solar and wind farms in the Sahara would more than double the precipitation in the Sahara, and the most substantial increase occurs in the Sahel, where the magnitude of rainfall increase is between ~200 and ~500 mm per year,” said Yan Li, a lead author of the paper.

“As a result, vegetation cover fraction increases by about 20 percent,” he added.

Safa Motesharrei, a UMD systems scientist and a lead author of the paper, stated that their model predicted that precipitation increases would result in “substantial improvements of rainfed agriculture in the region” while vegetation increase “would lead to the growth in production of livestock.”

The study mentioned Morocco as one of the countries which has launched renewable energy projects in the region.

“Solar and wind power projects in Africa and the Middle East are already underway, from Morocco to Dubai to Ethiopia, including over 200 GW of solar power planned by 2030,” said co-author Jorge Rivas.

Large-scale renewable energy farms in the Sahara desert could provide enough energy to replace the fossil fuel energy used in the region for the short and long term.

According to the study, such renewable energy farms would substantially reduce human-generated greenhouse gas emissions and mitigate climate change.

Speaking about climate change at the UN headquarters in New York on September 10, UN Secretary-General Antonio Guterres recognized Morocco’s contribution in the rise of renewable energy in the world.

“Morocco is building a solar farm the size of Paris that will power more than one million homes by 2020 with clean, affordable energy,” Guterres said. 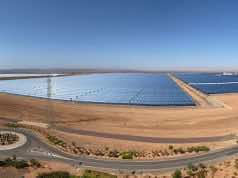