Rabat - Algerian authorities have blocked retired soldiers from entering Algiers, preventing them from protesting for their demands. 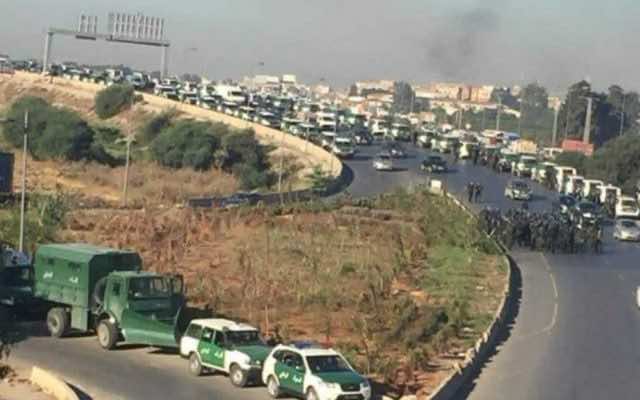 Rabat – Algerian authorities have blocked retired soldiers from entering Algiers, preventing them from protesting for their demands.

The former soldiers have camped for several days in Haouch El Mekhfi, a region in Boumerdes 30 kilometers east of the center of the Algerian capital.

Authorities, according to El Khabar news paper, called on the protesters to remove the camps.

Photos of the soldiers have gone viral on social media, featuring thousands of protesters marching to the Algerian capital.

Algeria mobilized a large number of policemen to block the main roads to the capital to prevent protesters from reaching Algiers, according to Algerian news outlet TSA.

Info Trafic Algerie wrote earlier today, “Traffic is paralyzed in both directions at the eastern entrance of Algiers because of a demonstration of retired soldiers.”

“This is our chance to pressure authorities to carry out our demands. We call on the president to not abandon the people who fought against terrorism in this country,” Bassaf told the news outlet.

The retired soldiers are calling on the government to increase their pensions. Some of the veterans fought in the civil war in the early 1990s.

The civil war was an armed conflict between the Algerian government and Islamic groups.

According to the New Arab, the soldiers have been demanding benefits for disabled troops, including housing and health care.

In response, the Algerian military shared a statement accusing demonstrators of “spreading seeds of doubt” and “attempting to mislead public opinion,” according to the New Arab.

Authorities have prohibited all protests in Algiers since 2001.

Throughout this year, Algeria saw a significant shift in power as the interior ministry sacked several senior military figures for alleged involvement in corruption and drug trafficking.

However, one Argentinian analyst said that the purge of leadership is in order to “ensure the success” of the next presidential election in early 2019.

Algeria’s ruling party, the National Liberation Front, called on Algeria’s President Abdelaziz Bouteflika to run for a fifth term in the election.

“Algeria’s constitution establishes a maximum of two five-year presidential terms, but President Abdelaziz Bouteflika, 81 and wheelchair-bound since 2013, will stand for a fifth consecutive term in elections without any international oversight,” he said.