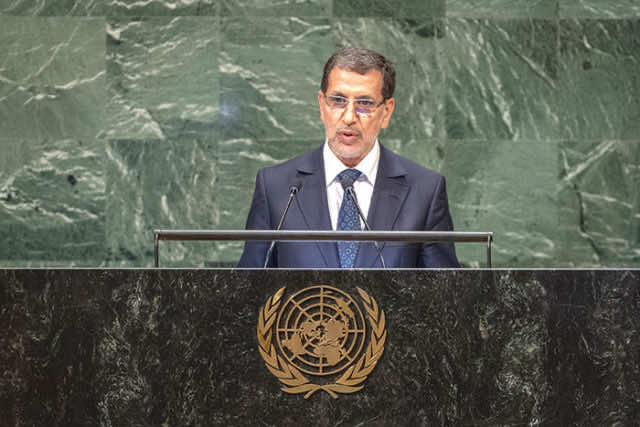 El Othmani addressed the conflict in his statement at the 73rd session of the United Nations annual General Assembly on Tuesday, September 25.

El Othmani condemned the “tragic” situation of Sahrawis “held” in Tindouf camps, in the westernmost province of Algeria, across the border from Morocco.

El Othmani renewed Morocco’s call for a “full and uncompromising demand” by the international community to “urge” Algeria to shoulder its full responsibility in the conflict and to allow the United Nations High Commissioner for Refugees (UNHCR) to fulfill its mandate to conduct a census of the population living in Tindouf camps.

Throughout the year, Morocco has been calling on the United Nations to conduct a census in the territory. Morocco also wants the UN to investigate allegations of systematic embezzlement of the humanitarian aid sent to Sahrawis living in the camps.

For its part, Algeria has contested that it needs to be involved in a political solution, saying the Western Sahara conflict should be solved only between Morocco and Polisario.

Morocco’s diplomacy reads Algeria’s responses as a way to keep the conflict ongoing. In August, Morocco’s permanent representative at the UN, Omar Hilale, said that Polisario is a “mere tool of Algeria, and everyone knows it.”

According to the Moroccan diplomat, there can be no solution to the four-decade-long issue if Algeria does not participate.

In his statement to the participants of the General Assembly, El Othmani reiterated Morocco’s active role in the UN.

He said, “Morocco has been always an active member of the United Nations and an official in the international community and will continue to believe in the principles of the organization and trust in the effectiveness of multilateral action.”

He also explained that Morocco “fully supports the initiative launched by the Secretary-General of the United Nations, Antonio Guterres, in the area of peacekeeping and peacebuilding.”

He said that “Morocco has made its relations with the African continent one of the top priorities of its foreign policy.”

El Othmani mentioned King Mohammed VI’s vision for the continent, saying that the monarch “is keen to propose an African vision for every issue on the international agenda and to contribute to supporting African and international efforts to win the peace and development bets, and good governance. “

He added that Morocco is also determined to shoulder its responsibilities in mobilizing “efforts to maintain security, peace and stability” in Africa as a member of the African Union Peace and Security Council.