Rabat - Morocco’s relationship with its Jewish communities has been the subject of wide interest—both scholarly and journalistic—in recent years. 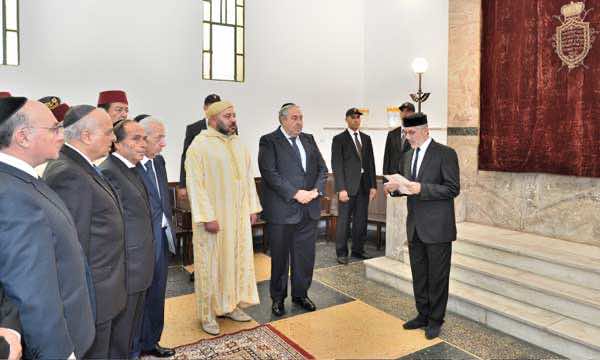 Rabat – Morocco’s relationship with its Jewish communities has been the subject of wide interest—both scholarly and journalistic—in recent years.

While the world generally views the Arab-Jewish relationship as conflictual and continuously tumultuous, a recent message by King Mohammed VI to a symposium on the sidelines of the UN General Assembly, has opted for the contrary. The King said that, at least in the Moroccan context, peaceful coexistence between Jewish and Muslims is real and has been so for generations.

Drawing attention to a history of peaceful coexistence between different faiths in Morocco, the King reiterated Morocco’s desire to not only fight anti-semitism, but also to promote religious tolerance and open-mindedness in school.

The message was delivered by Head of Government Saad Eddine El Othmani at a roundtable on “The power of education in preventing racism and discrimination: the case of anti-Semitism.” The King underlined Morocco’s historical role as a champion of religious dialogue and peaceful cohabitation.

Antisemitism, the King said, “provides a breeding ground for violent extremism and growing insecurity.” He added, “Anti-Semitism is the antithesis of freedom of expression. It implies a denial of the other and is an admission of failure, inadequacy and an inability to coexist. It implies an anachronistic return to a mystified past.”

The King called participants at the UN roundtable to “promote education for peace” and invest in education and culture to win the battle against the proliferation of exclusive and racist ideologies. The legacy of exclusion and suspicion, he concluded, should not be passed on to future generations.

Following the King’s message, a number of international media outlets have speculated about the implications of the King’s insistence on religious cohabitation and the teaching in Moroccan schools of an inclusive and comprehensive approach to history.

Journalists have raised the possibility that Morocco might include the Holocaust and other episodes of Jewish history in Moroccan history textbooks.

The King’s message, they argued, points to a willingness to integrate historical episodes that were previously sidelined or ignored by Moroccan textbooks.

But whether King Mohammed’s insistence on a collective and inclusive Jewish-Muslim history will indeed be taken into account in the country’s history textbooks is bound to remain media speculations.

The Moroccan Ministry of Education did not respond to Morocco World News repeated requests for comment. Fatima Ouahmi, head of the ministry’s communication department, told us that she is “not qualified to answer.”

Agence France Press (AFP) also reported earlier today they contacted the communication department of the Ministry of Education for comments. The ministry refrained from commenting, telling AFP to refer to the original message. The King has not ordered the government to include the Holocaust in Moroccan school books, AFP reported.

Rachid Aguadou, the director of the cabinet of the Ministry of Education was unreachable.

We’ve been here before

While King Mohammed VI’s much-reported message has taken on a new meaning in media circles, especially given the context of the King’s continued focus on youth-related matters, headlines about the complex history of Moroccan Jews have been around much longer.

In October 2017, Israeli outlet Haaretz reported a partnership between Morocco and the US Holocaust Museum to “educate about the Holocaust and counter intolerance.”

Haaretz added that museum director Sara Bloomfield invited Prince Moulay Rachid to attend another event in Washington, D.C., to honor his grandfather, King Mohammed V, “who refused to hand over Jewish Moroccans to the Vichy France occupier during the Nazi period.”

For all the positive accounts about Morocco’s genuine concern for its Jewish population and government-backed efforts to integrate minorities in the public sphere through various cultural events or participation in international forums on socio-religious tolerance, the numbers and historical records tell a mixed tale.

In a 2016 book on Jewish-Muslim cohabitation in Morocco, the Moroccan historian Mohammed Kenbib retraces the trajectory of Moroccan Jews between 1858 and 1948 to the present, shedding enormous historical light on inter-community relations in Morocco.

The book pointed to Morocco’s dwindling Jewish populations since 1948, between the creation of the State of Israel and mounting fear among Jews around the world about their security and well-being in other parts of the world.

Raising questions about remnants of Morocco’s Jewry and the ties now binding Morocco with its Jewish communities—both living in Morocco and dispersed across the globe, Kenbib speaks of the Jewish presence in Morocco in terms of one of the North African kingdom’s greatest cultural and historical assets.

Kenbib’s book, however, is rueful and nostalgic about the gradual loss of Morocco’s Jewish heritage. Whereas in 1948 Morocco had over 265,000 Jews, the numbers today are just somewhere around 10,000, Kenbib’s various sources concurred.

Other sources say as few as 3,000 Jews live in Morocco today, indicating the general tendency towards emigration to places where they feel relatively more safe. The majority of Jews of Moroccan descent now live in France, Israel, the US, and Canada, while thousands others are disseminated around in the world.

Despite the massive emigration of Moroccan Jews, Morocco’s current tiny Jewish community still remains the highest in number among Jewish communities in the Arab world.

And, like King Mohammed VI’s message at the UN symposium, Kenbib’s book is filled with suggestions and historical examples of functional cohabitation between Muslims and Jewish Moroccans.

The thesis stands in stark contrast with the suggestion that the entirety of the Arab world has been historically founded on the marginalization and downright exclusion of Jewish communities.