Rabat- El Othmani has called on government ministers to use only Tamazight (Berber)  and Arabic in their administrations.

In an official statement issued on Tuesday, Head of Government Saad Eddine El Othmani has urged administrations across the country to use Tamazight side by side with Arabic. The two are Morocco’s two “official languages,” he said, according to “the fifth chapter of the constitution.” 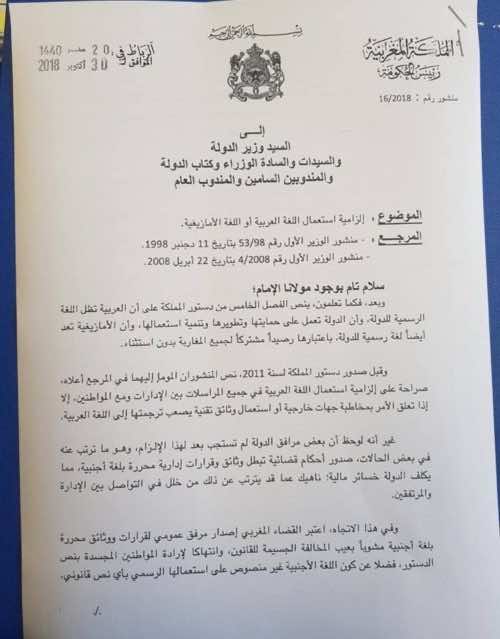 El Othmani repeatedly asserted the need to use only Arabic and Tamazight in official documents instead of foreign languages. Tuesday’s statement notes the administrations’ “lack of consideration” of the government’s previous calls.

Although El Othmani did not name “foreign languages,” he had previously said that French, the most used foreign language in the country, only signifies Morocco’s openness to foreign cultures. He said that public institutions should communicate in Arabic or Tamazight with citizens.

El Othmani has encouraged the usage of Tamazight in essential documents such as contracts, ID cards, passports, drivers’ licenses, and banknotes in Morocco along with Arabic. He noted that some government officials in public institutions did not abide by the “obligation.”

The act has prompted the government to remove some files and documented decisions published in foreign languages, presumably in French, which has caused “financial losses” for the state.

In previous speeches this year, El Othmani insisted that Tamazight should find a stronger presence in the Moroccan educational system, media and literature, because it is part of the country’s “rich national identity.”

For Tamazight’s better integration in the educational system, the government presented draft laws 26.16 and 04.16.

The first law relates to the integration of Tamazight into national education and administrative institutions and the second to the National Council for the Languages and Culture of Morocco concerned with protecting and developing both Arabic and Tamazight.

In a Parliament session in June, El Othmani said that the Radio and Television National Society (SNRT) should increase their broadcasting of the Tamazight television channel from 14 hours a day to 24 hours, as is the case for other television channels in Morocco.

Morocco’s 2015-2030 strategic vision of education stresses the use of three common languages in the kingdom: Arabic and Tamazight as the official languages, and French as a means of “openness” to other cultures.