By
Irina Tsukerman
-
Irina Tsukerman is a New York based attorney, whose focus is on assisting human rights defenders, liberal democratic dissidents, and persecuted minorities, and who frequently writes about security issues, human rights, international affairs, and geopolitics.
Nov 4, 2018
Spread the love

New York – The conference, held at the Ziegfeld Ballroom in New York, brought together noted theologians, representatives of the US State Department, analysts, and others for two days of open discussions on a variety of subjects central to Muslims, Christians, and Jews.

Morocco figured prominently in the discussion, and Dr. Abdelhak Azzouzi, professor of international relations and political science, spoke on the panel about the polemic of cultural hegemony between moderation and extremism. Morocco, which is at the helm of fighting ideological extremism in Africa, has much to contribute to the discussion of how a culture of integration, tolerance, and respect can guard against infiltration by extremists—violent jihadists and Muslim Brotherhood ideologues—who seek to hijack the discussion on intercultural differences. It can do so through preventive outreach, guarding mosques against jihadist influence, and offering opportunities to vulnerable populations targeted by radical groups like ISIS.

Today’s political climate does a tremendous disservice to peaceful, law-abiding Muslims in the United States, as well as Muslims residing in other countries. Unfortunately, the Islamists who work to sow divisions between Muslim communities and non-Muslims in the West contribute to the emergence of extreme ideas and ideological threats. For that reason, the conference was a good way to bring all players together to better understand the bigger picture: There is a vibrant discussion within Muslim religious communities about various issues, as well as the direction and the future of these communities, similar to other religious communities.

Furthermore, while the Muslim world is diverse, much of that does not come through in the type of sensationalist information that reaches the average American, who is ignorant about these communities beyond what these massive organizations and their spokespeople have to say. The way to combat these misunderstandings is to assist individual communities with forming their own representative organizations that will reflect their values. At the same time, working with diverse communities to create a centralized system, carefully monitored and free from politicized influences will ensure transparency, bring more and different types of people to the table, and perhaps work to discourage bad-faith actors from hijacking the discussion.

In the past, the American government supported Muslim Brotherhood front organizations, such as the Council on American Islamic Relations (CAIR), the Islamic Society of North America (ISNA), Islamic Relief, and others, which have monopolized the discussion on Islam and issues affecting Muslims to the detriment of all other voices. These organizations have used their platforms to shut down all other voices within the diverse Muslim communities in the United States, presenting American Muslims as monolithic supporters of political Islam.

Rather than addressing issues central to the interests of individual communities—education, access to services, understanding US history and government, and outreach to other organizations and communities—these self-appointed spokespeople have focused the discussion on creating a grievance culture and centering foreign agendas at the forefront of the discussion.

CAIR and  ISNA are unindicted co-conspirators in the Holy Land trial, which brought down a network of charities laundering money for terrorist organizations. Islamic Relief is under investigation for its alleged links to the Muslim Brotherhood, which funds a number of terrorist organizations in the Middle East. These organizations have become dominant voices in the media, discrediting all other groups as “fringe” and presenting themselves as the only legitimate and mainstream representatives of Islam in the United States.

As a result of these efforts, many American Muslims have become disenfranchised from both the political process and community organization. When wealthy lobby groups, such as those affiliated with these Muslim Brotherhood fronts, hijack discussions with members of Congress and the administration thanks to high level networking, generous campaign donations (often from suspect foreign sources), and flashy public relations, what hope is there for independent community organizations which do not rely on Muslim Brotherhood donations for support?

Giving media platforms only to one type of practicing Muslim ignores the diversity of voices from across the religious spectrum, which engage in internal theological discussions and debates throughout the many communities in the United States. By presenting a monolithic view of Islam to the American public, Islamist organizations have ensured that a certain stereotype of Muslims as dishonest in their political intentions will be perpetuated among those who get the bulk of their news about Islam from news stories about terrorism.

To that end, the United States should also be working with other countries, its Muslim allies, who are likewise dedicated to eradicating extremist ideologues, and supporting peaceful, constructive, and forward-looking conversations within their local and global communities. Conferences, such as this one, are a good start. But there is also room for smaller working groups; practical skill building workshops with different communities and with US embassies and immigration staffers; and joint activities which facilitate humanization and understanding of everyone involved.

During the course of the conference, individuals like evangelical pastor Bob Roberts, Jr., from Texas spoke about working to create welcoming, apolitical environments for Christian pastors and imams to interact and share the message of inclusion with their congregations.

Moroccan-Americans in New York (MANY), led by Simo Elaissaoui, is a local community organization inclusive to Moroccans of all faiths which has been hosting joint dinners with members of the American Jewish community in relaxed social settings devoid of political agendas and oversight. The Muslim Americans Leadership Alliance (MALA), headed by Zainab Khan, and represented by Chief of Staff Jean Schindler at the conference, engages young Muslim Americans of assorted background in cultural activities and engages and humanizes its audiences through representation of individual Muslim American experiences and stories.

These organizations have worked in tandem with other organizations, such as the American Sephardi Federation, headed by Jason Guberman Pfeffer, who spoke about the Sephardic experience in building bridges between the East and the West, for joint cultural programming and understanding of each other’s histories, interests, and ways to work together to promote good relations.

How Morocco can contribute to future endeavors

Perhaps in the future, Morocco will share the wealth of its successful experience in interfaith and inter-ethnic understanding—such as its tolerant imam training program—by sending a graduate of its seminal imam training center as a model for future such efforts among other participants.

Meanwhile, the message of the conference was clear: There may be many misunderstandings, and communication could use a great deal of improvement, but everyone who was in the room was committed to open dialogue, learning from one another, and implementing specific advice towards the kind of changes that can bring even more people looking to share in relationship and community-building in the near future.

Learning from successful historical precedents—such as Morocco’s long-standing relationship with the United States—can only benefit both countries and shape a more optimistic outlook towards shaping the narrative and the vision for future relationship between the United States and the Muslim world. 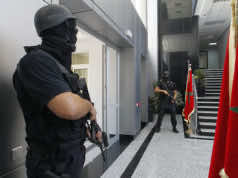 Morocco Among Countries Least Affected by Terrorism in 2017 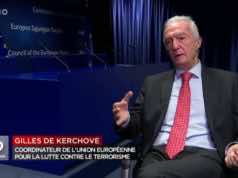 EU Has ‘a Lot to Learn’ from Morocco in Fighting Radicalization: Anti-Terror Chief