Beirut – The Arab Forum for Environment and Development (AFED) launched its annual report, Financing Sustainable Development in Arab Countries, at its 11th conference on November 8 in Beirut.

The AFED report notes that the Arab region needs more than $230 billion a year to achieve the Sustainable Development Goals (SDGs). The annual funding gap is estimated at more than $100 billion.

The report also highlights the losses in economic activity due to the region’s wars and conflicts since 2011, which have amounted to about $900 billion. The price tag for achieving sustainable development will likely increase as regions will need to reserve money for reconstruction efforts in war-torn countries.

The report points out the decline of public and private sources of funding in the Arab region. For every dollar entering through foreign direct investment inflows, about $1.8 is reinvested abroad, either through direct investment outflows or through the diversion of profits generated by foreign investors.

At the same time, the region remains a lender to foreign banks based abroad, with deposits of Arab customers at major international banks consistently higher than loans given to Arab customers from these banks.

The AFED report calls for reversing this investment into the Arab region, which needs to reform fiscal policies, combat corruption, and provide incentives and facilities to encourage investment and efficient use of resources.

The opening ceremony was addressed by former Lebanese Prime Minister Fuad Siniora, who stressed the need for fiscal reforms and enabling policies to open the way for a green economy in the Arab region.

He highlighted the importance of investing in the water-energy-food nexus, and fighting climate change “which is a major challenge in the Arab region.”

A former banker and minister of finance, he called upon the private financial sector to reform its operations and adopt innovative approaches to secure the funds needed for implementing sustainable development goals. He called this “an opportunity not an obstacle.”

However, he stressed the need to put in place regulatory measures, public policies, and incentives to attract private investments in long-term projects.

Taoufik Rajhi, Tunisia’s minister in charge of large-scale reforms, pointed out that his country’s new constitution emphasizes the right to a healthy environment. Implementing SDGs necessitated the development of the Financing Strategy for Sustainable Development in Tunisia through environmental funds, such as the Pollution Control Fund and the Energy Transfer Fund, public-private partnerships, and international financial cooperation.

The conference was inaugurated with a welcome speech by Adnan Badran, chairman of AFED’s board of trustees and former Jordanian prime minister. He said that “Arab governments are required to efficiently manage human, financial and natural resources, eliminate corruption and establish public-private partnership to achieve sustainable development.”

He also called for “the fostering of peace through active diplomacy to resolve conflicts in the region.”

He especially focused on the importance of “diverting the heavy costs of arms procurement in the region towards financing the green economy and supporting sustainable development which would also open up new employment opportunities.”

Najib Saab, AFED’s secretary general, presented the new report, explaining that “while the previous ten AFED reports identified the status of the Arab environment and proposed solutions, now is the time for implementation, and this requires finding adequate funding sources.”

Saab outlined AFED’s achievements for the year 2018 and their impact on Arab environmental policies, especially in the areas of water and energy efficiency, by adjusting subsidy systems, diversifying the economy, introducing renewable energy on a large scale, and participating positively in international efforts to address climate change.

He concluded by stressing the need to invest in people-centered development based on the respect for human dignity, accountability, transparency, and justice.

The AFED Environmental Lifetime Achievement Award was presented to Suleiman Al-Herbish, who ended his 15-year term as director general of the OPEC Fund for International Development (OFID) just days before the conference.

“Suleiman Al-Herbish has been a global driving force in people-centered development. During his tenure, OFID advocated sustainable development and placed its principles at the heart of its work,” a statement from AFED said. It added that “one major contribution of Mr. Al-Herbish had been his tireless fight for energy poverty alleviation.”

Al-Herbish said in a speech after receiving the award that he had always “recognized that access to modern energy services is a vital precondition to realizing these Sustainable Development Goals.” He explained that OFID’s campaign to eradicate energy poverty preceded the UN’s Energy for All initiative.

“Our actions are based on a strategy with three pillars: Advocacy, expanding operations on the ground, and partnerships.”

Representatives of various Arab and international development funds at the conference discussed ways of collaborating to mobilize additional resources to achieve the Sustainable Development Goals.

They stressed that not all investments needed new funds, but are largely dependent on the diversion of funding from traditional projects to sustainable ones, alongside increasing efficiency and fighting corruption.

One session was devoted to financing sustainable energy, calling for the adoption of new instruments such as green bonds and Sharia-compliant sukuks (financial certificates), and stressing the importance of attracting private sector investment to renewable energy.

Business representatives spoke of the trade opportunities offered by the transition to sustainable development, provided that incentives, legislation, and appropriate laws are put in place.

The Organization for Economic Co-operation and Development (OECD) also held a special session in which it presented a report on “Investing in Climate, Investing in Growth.” It highlighted the positive impact of controlling climate change on advancing sustainable development. 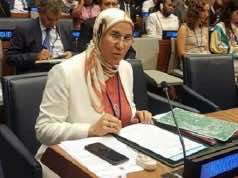