The number of provinces that will benefit from Riaya, King Mohammed VI’s cold weather aid plan in Morocco, has increased from 22 to 27. 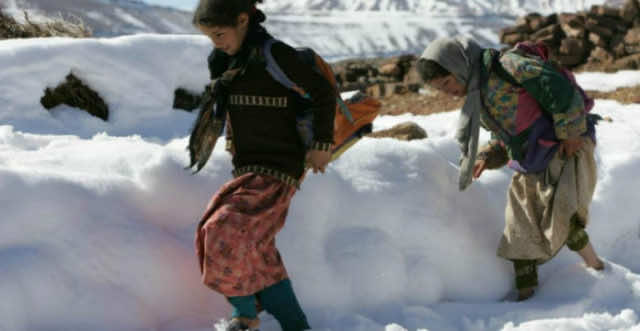 By
Ahlam Ben Saga
-
Ahlam Ben Saga is a Cultural Studies graduate from university Mohammed V of Literature and Humanities in Rabat.
Nov 28, 2018

Rabat – Speaking at Tuesday’s parliamentary session, Morocco’s Minister Delegate to the Minister of the Interior Noureddine Boutayeb said that a parliamentary meeting in October set a series of measures to help Moroccans cope with the season’s temperature drops.

Increasing the number of people benefitting from the Riaya plan in more rural and mountainous areas hit by heavy snowfall was at the heart of the meeting. The meeting added Khemisset, El Hajeb, Oujda, and Jerada—, near the border with Algeria, to the national plan.

The aid includes blankets, firewood, and foodstuffs for the 27 provinces.

At the request of King Mohammed VI, the Royal Armed Forces (FAR) will set up field hospitals in Ouaouizerth, a small rural town in Azilal Province, and the village of Anfgou in the Midelt Province.

The Riaya plan will also provide shelter and care for homeless people, and supply blankets for orphanages, boarding schools, and hospitals.

It will plow snow off the roads in collaboration with the Ministry of Equipment, Transport, and Logistics.

The early snowfalls beginning late in October in the Atlas Mountains towns and cities of Azrou, Midelt, Boulemane, Taza, El Hajeb, Imouzzer, and Ifrane took the country by surprise, especially because the annual cold weather plan had not yet been fully implemented.

Despite the early snow, roads blocked with snow were no surprise. Increasing complaints about the lack of snow removal equipment followed the death of a shepherd who went missing in heavy snow in Taza in the Atlas Mountains.

The shepherd had been missing for a week and was found frozen under layers of snow.

Early in November, King Mohammed VI gave instructions to the Mohammed V Foundation for Solidarity to mobilize in order to face the significant temperature drops forecasted across Morocco.

The foundation carried out a medical campaign in the town of Boumia, located in the Midelt Province in the Draa-Tafilalet region.

The campaign offers medical services, including general medicine, internal medicine, pediatrics, maternal health, dentistry, ophthalmology, biology, radiology, and screening for physical disability in order to manufacture the appropriate equipment, according to the statement.

US suspension of arms to Egypt could be lifted: Kerry

IMF points to progress in aid talks with Egypt