Raja of Casablanca wins first continental crown in 15 years despite a surprising 3-1 defeat in DR Congo. 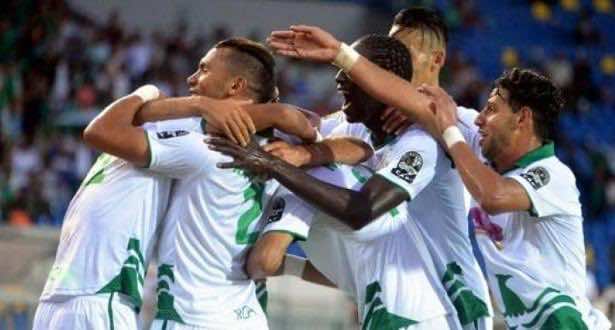 Rabat – Morocco’s Raja of Casablanca won the African Confederation Cup despite a dramatic 3-1 defeat in the second leg of the final, which took place tonight in Kinshasa.

Kinshasa was never going to be easy for Raja of Casablanca, especially after slapping DR Congo’s Vita in an unforgettable night in Casablanca.

So when the Moroccans walked down the Congolese stadium, they did so, as their coach said in the pre-match press conference, with the feeling of a tough but achievable mission. They knew that the Congolese side is famous for being clinical and rapacious at home. So they had to deal with it.

Raja started the game rather confidently. Perhaps in a bid to maintain their first leg dominance, the Moroccans kicked off with tempo and energy, indefatigably running at the Congolese. The Moroccans were impressive, rampant, offensive, and dominant. At least during the first 20 minutes.

That first half energy was soon rewarded. Just 21 minutes in the game, Raja’s Abdelilah Hafidi sent home a fine goal. It was not only a goal, though. It was a staggering statement, one that evinced all the importance that Raja attached to the continental glory that has not been theirs since 2003. At 1-0 in favor of the away side, it was difficult for the home side, the Congolese, not to feel haunted, hunted. The crowd begged for, demanded a reaction.

Faithful to their pristine home reputation, however, Vita players progressively grew into the game. Such, in fact, was their growth that, in the last minutes of the first half, they announced what the second would be like for Raja: a nightmare, a hellish experience. One of those moments when you pray the gods of the game to already end the suffering that the opponents are callously inflicting on your side.

At 45+4, in the dying minutes of the first half, Vita’s Jean-Marc Makusu scored the equalizer. That was never enough to bring hope back. But it counted—crucially.

Armed with their famous “home winner” mentality, Vita stressed Raja to their core, crushing the Moroccans’ tactical disposition and forcing them to defend. So intense was the Congolese pressure that Raja was reduced to a defensive team.

Stylish, dominant, irrepressible, stubborn, and impossibly invasive, Vita were all over the place. Raja tried to resist, but the heat proved unbearable. So they gave in reluctantly, frustratingly, ruefully.

2-1 at minute 71, 3-1 at the 74th minute, it was now Raja that stood incredibly shocked at the seemingly imperturbable composure of this bunch of Congolese lads who actually believed that a miracle was possible.

Perhaps aware that playing offensively would amount to nothing but reckless lack of judgment, Raja’s Spanish coach instructed his players to park the bus.

But isn’t that what Raja had been doing for the entire second half? So he told them to park it even further, to erect a defensive citadel so impenetrable that Vida’s attacking would ultimately sound laughable.

That was it. Ultimately, Raja suffered greatly, but they won deservedly, at least when you consider how dominant they, too, had been at home just a week ago.

It was a commendable display from Vita, but an enterprising match from Raja, for in the end they won. On aggregate, the score sheet read 4-3 in favor of Raja, definitely sealing the Moroccans’ first major continental trophy in 15 years.