In a foreign policy reversal, Trump is expected to announce a “full” and “rapid” withdrawal of US troops in Syria.

Rabat – After Trump declared that the US had “defeated ISIS in Syria” in a tweet Wednesday morning, administration officials expect the US president will announce, as early as today, the complete withdrawal of American troops from Syria. The move marks an abrupt reversal of US policy and military strategy in the Middle East.

We have defeated ISIS in Syria, my only reason for being there during the Trump Presidency.

Currently, the United States has around 2,000 troops in Syria, focused on training local Kurdish forces to fight ISIS.

Thanks to a recent string of successes, the Kurdish-led Syrian Democratic Forces are close to capturing the final major town held by ISIS east of the Euphrates. Nonetheless, according to the Department of Defense inspector general’s report, the number of ISIS fighters in Iraq and Syria could be as high as 30,000.

Ever since Turkish President Recep Tayyip Erdogan promised to launch a new offensive against American-backed Kurdish troops, Trump has reportedly been eager to pull out American troops. Trump argued the Turkish offensive could threaten US forces in Syria and reportedly prefers a rapid removal of all US forces, despite the warnings of senior security officers.

President Trump has long desired to remove American troops from Syria, a promise of his presidential campaign.

Pentagon officials reportedly argued the move would betray Kurdish allies who could soon be threatened by a Turkish military offensive. Officials also argued the US would cede its influence in Syria to Russia and Iran, diminishing US influence in the region.

Pentagon officials asserted that abandoning Kurdish allies could inhibit future efforts to regain the trust of local fighters, such as those in Afghanistan, Somalia, and Yemen.

Details of the administration’s debate on Syria were first reported by the Wall Street Journal.

“At this time, we continue to work by, with and through our partners in the region,” Colonel Rob Manning, a Pentagon spokesman, said Wednesday morning.

The US will keep over 5,000 troops in Iraq, capable of launching strikes into Syria. In the past couple of weeks, the US has carried out air and artillery strikes from Iraq targeting ISIS in Syria.

One Department of Defense official suggested Trump wants to divert attention from a series of legal challenges over the past week. The move has the potential to act as a distraction from the Russian investigation conducted by Special Counsel Robert Mueller and the sentencing of Trump’s former personal lawyer, Michael Cohen. 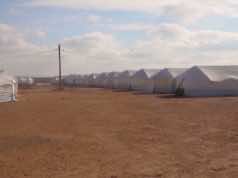 Up to 600 European jihadists have fought in Syria: study

Syria to vote for new constitution on Feb. 26