WhatsApp Messenger is adding new features that will change the application’s layout, upgrade its usage, and make it more sophisticated.

Dark Mode was first introduced on Youtube in 2018. Now, WhatsApp will also adopt it.

Users will be able to use their favorite chat application without hurting their eyes under low-lighting. Dark Mode minimizes the damage caused to the eye when staring at screens for a long time. The new feature will also help save phone power.

WhatsApp will offer users the option to turn on or off dark mode at anytime.

With video preview, users can view videos directly from the notification bar. The current version of WhatsApp has the same feature, but only for GIFs and images.

WhatsApp’s new version will rank contacts based on which ones the user chats with most.

Like emoji search, users will be able to search for a sticker by typing in related key words. Related stickers will pop up as options to insert.

With the exception of the latest phones, some older devices do not have fingerprint lock/unlock originally installed in the software.

WhatsApp is expected to endow its latest version with the fingerprint lock/unlock option, without having to install it from the App Store or Google Play.

Inside the ‘Americans Stuck in Morocco’ WhatsApp Group 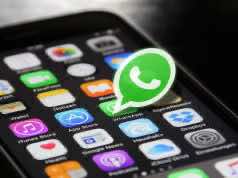