A PJD MP admits she took off her veil in Paris but is adamant about her inalienable freedom to make personal choices.

Rabat – Islamist MP Amina Maelainine has acknowledged the authenticity of widely-circulated pictures of her without a hijab, compelling a u-turn move from Morocco’s Islamist establishment.

When pictures emerged weeks ago depicting Morocco’sJustice and Development Party  (PJD) MP Amina Maelainine in jeans and T-shirt and without her hijab in front of Le Moulin Rouge, a Parisian cabaret, the Islamist MP was adamant that the photographs were “fake” and “fabricated.”

Maelainine said the pictures were a montage from Islamism-hostile circles that wanted to defame her, harm her public image, and ruin her political career.

According to a recent report from Moroccan outlet Le 360, however, the Islamist MP “has been compelled to recognize that the pictures were real.”

Personal is not political

Without giving details about what made Maelainine back down from her denials, the newspaper suggested that the controversy had reached a point where both the party and the MP opted for damage control instead of continued denials.

Despite the MP’s threats of suing her most vocal “defamers,” critics were adamant that the pictures were real, suggesting that they were ready to go to any length to prove the PJD’s and Maelainine’s “hypocrisy” and “fraud.”

So she had to mitigate the damage or get caught in a dispute that would have cost her and the party more than a slightly bruised public image, Le 360 suggested.

Read Also:  Moroccans Should Focus on MP Maelainine’s Politics, Not Her Clothes

But even while “confessing,” Maelainine did not bow to critics’ “intrusion” into her private life. Like in her denial post a week ago, she suggested that her public actions as an MP should not interfere with her personal tastes or choices.

“Having suffered all these attacks and having seen the robust means deployed to harm my reputation, I am more than ever convinced that the path to militancy must be followed with determination and commitment. The battle should be fought in Morocco or abroad, with or without a veil, for the sake of democracy, freedom, justice, and human rights.”

Hijab not a PJD requirement

Both Maelainine’s acknowledgment of the pictures’ authenticity and her defense of her politics and convictions have raised eyebrows in Morocco’s secular and Islamist circles.

While secularists tend to feel satisfaction at unearthing the “contradictions of the Islamists,” Islamists are having a hard time processing Maelainine’s latest position. Condemning “extravagant” and “suggestive” clothing is part of Islamist ideology, blending the personal and the public expression of selfhood in one single basket of “virtue” and “religiosity.”

But such ideological reckoning was not the most interesting part of the latest developments in the Maelainine affair. The interesting part, should Le 360’s report be confirmed, is the u-turn that the MP’s “confession” has provoked in the PJD establishment.

Maelainine is considered to be close to Abdelilah Benkirane, the former head of government and PJD leader who is still a party mogul. According to the newspaper, Benkirane spoke to his protege in the heat of the controversies about her Parisian adventure.

“Before anything else, I blame you for failing to come to me first for advice as soon as the scandal broke out,” the PJD mogul reportedly told the MP. Had Maelainine spoken to him first, Benkirane went on, he would have told her that “the choice to veil or not was hers alone.”

Whether the pictures were real or not, the former PJD boss elaborated, Maelainine should have responded to her “detractors” that her choice to take off the veil abroad was “no one’s business.”

He added: “Tell them that, if your husband does not like that choice, he should ask for divorce; if you owe anyone anything, they should come and claim it; if you violate the law, let them punish you; if you do not respect a party commitment, let them challenge you. But since putting on the veil has nothing to do with any of those, it is a personal matter that depends on you alone.”

The “unlikely” support from Benkirane, the newspaper argued, boosted Maelainine’s morale, resulting in the defying militancy and conviction-riddled statement she went on to post on her Facebook.

A tale of Islamists vs. leftists

The Maelainine case is hardly the first time that Moroccans have called out PJD politicians for hypocrisy. In September 2018, interior minister and PJD member Mohamed Yatim came under criticism when he appeared on a Paris street with a young woman.

Yatim said the woman was his fiancee, but critics were unimpressed. The PJD minister received backlash for his party’s “bogus” and “self-righteous” platform thriving on “moralization” and “profiteering.”

In addition to rising to Maelainine’s defense in their reported meeting aimed at calming the controversy tides, Benkirane tried to minimize the probability of such occurrences in the future.

“If my daughter tells me she wants to take off her hijab, I will tell her that the choice is all hers…. I have often said that wearing the hijab is no precondition for being a PJD member. We have even tried to have unveiled female candidates run in elections,” Benkirane said, apparently departing from the morality-obsessed party that the PJD has traditionally been.

But as PJD’s endorsement of autonomous choices comes amid controversies targeting “important” party members, it is questionable whether critics were listening.

The PJD has generally been unapologetic with Moroccan leftists’ lifestyle. And as PJD now calibrates its platform, the country’s leftists are laughing off the party’s “liberal-clothed” statements, reinforcing perception of the Islamist party as “hypocritical.”

Nabila Mounib, general secretary of the Unified Socialist Party, said at a party meeting  in Tangier on Wednesday that she was “intrigued” to know what Islamic tenet accepts that women be free in Paris but “wear a bag” in Morocco.

“Hypocrites will burn in the ninth chamber of hell,” Mounib said, apparently using PJD’s own reference points to lambast it. “It has become necessary to denounce Islamists’ contradictions. Religion is no one’s property and we cannot accept … that our society be Islamized.”

Scarf-Scandal MP Amina Maelainine: ‘There is Cowardice at Morocco’s PJD’ 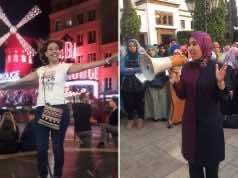 ‘I Will Continue This Fight’: Maelainine Hits Back at Morocco’s PJD

Amina Maelainine: ‘Wearing the Hijab is Not a Religious Requirement’