By
Tarek Bazza
-
Tarek Bazza is a journalist at Morocco World News with Master’s degree in Translation from King Fahd School of Translation in Tangier.
Jan 23, 2019
Spread the love

According to Lavrov’s spokeswoman Maria Zakharova, the Russian minister will hold “meetings with representatives of the countries’ top leadership as well as talks with the foreign ministers.”

The officials will discuss bilateral relations and share opinions “on key issues of the regional and international situation,” Russian news agency Tass quoted Zakharova as saying on Wednesday.

The three Maghreb countries “pursue an active foreign policy, make a substantial contribution to multilateral efforts towards finding the answers to new challenges and threats, including global ones,” Zakharova explained.

The spokeswoman noted that Russia has interests in increasing cooperation with the three Maghreb countries. Through the talks, Russia will also focus on coordinating “on the settlement of the problems existing in the Middle East and North Africa, as well as the Sahara-Sahel region,” she added.

Trade between the two countries has increased in recent years. The volume of trade increased from approximately $200 million in 2001 to $2.5 billion in 2015.

However, in the first seven months of 2018, total trade between Morocco and Russia was down to $900 million.

Russian Minister of Agriculture Dmitry Patrushev stated that the volume of bilateral trade in agricultural products and food has increased. “Since the beginning of this year, it has amounted to more than $300 million,” Patrushev said. He asserted the figure was a 16 percent increase from the previous year.

He also predicted, “The agricultural trade between Russia and Morocco will grow to $500 million.” 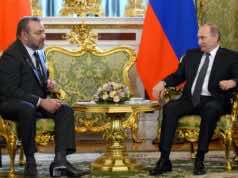