The pro-Israeli Jewish singer will perform a concert on Valentine’s Day in Casablanca, despite boycott threats.

Following news of Macias’ February 14 concert, the Moroccan Academic and Cultural Boycott of Israel (MACBI) called for a boycott of the singer, describing him as “a strong defender of the Israeli occupation of Palestine.”

Speaking on the French Radio network RMC on February 1, Macias said that he does not care about “the few” who want to boycott his concert, and he will still travel to Casablanca.

“My victory will be to go and perform in Casablanca … I am going and whomever wants to attend is welcome,” he stated.

The French singer of Algerian-Jewish descent said that Morocco is a country of tolerance, and he would not change his mind about that because of “some individuals who want to hurt” him.

“I know the Moroccan people…. I compare Morocco to the Andalusia of yesterday because it is a country of tolerance.” He continued, “If you want to do something to me, now you know that I’ll be arriving at the airport on February 14.”

MACBI considers Macias’s presence on stage at Megarama a “shame and an insult to the Casablanca public.” The association emphasized in a statement released on January 13 that Macias is giving his “blood, sweat and tears” to the association Migdal, which supports the Israel border police, Magav.

The boycotters stated that Magav is “known for its war crimes against the civilian population.” They also cited Macias’ pro-Israeli statements from 10 years ago.

In a video interview, Macias said: “From the beginning of my life, I have always devoted my body and soul to the State of Israel but primarily to Tsahal, but now to Magav … I do this neither for my advertisement, nor for my career, nor anything at all … I always gave for the State of Israel, for Tsahal, Magav, and for Migdal. Believe me, that’s the miracle of Israel.”

Born in December 1938 in Constantine, Algeria, Macias’s birth name is Gaston Ghrenassia. He is a songwriter and musician who left Algeria with his wife in July 1961 to live in France. 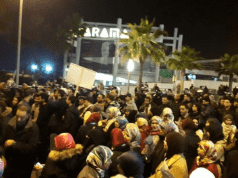