Spokesperson of the Algerian opposition party, Rally for Culture and Democracy, said that “there will be no election but an appointment of the head of state.” 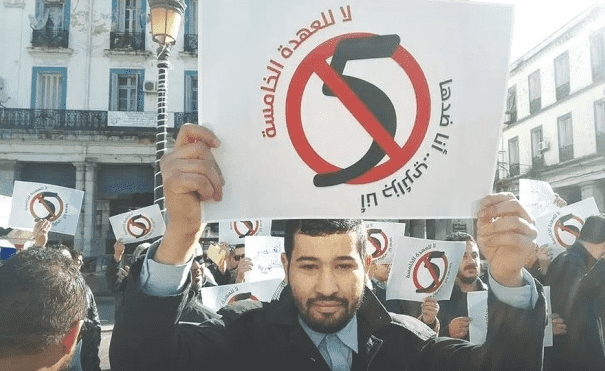 Rabat – Dozens of Algerians took to the streets to condemn the decision of Algerian President Abdelaziz Bouteflika to run for a fifth term in April’s presidential election.

Protesters held banners reading “No fifth term. I am Algerian, I am against it.”

The spokesperson of the party said that there “will be no election but an appointment of the head of state.”

In one of the posts, Derradji wrote that he is sad for his country.

In another post, Derradji also criticized Algerian youth for not taking action to stop what is happening in the country’s political scene.

In a third post, the beIN Sports journalist also cast doubt on Bouteflika’s ability to perform his constitutional duties.

“Bouteflika did not run, nor can he make his candidacy, nor campaign, nor even oath.”

A group of Algerian activists also launched an online campaign using the hashtag “Let_Him_Rest,” implying that Algerian elites pushed Bouteflika to run for the fifth mandate.

Bouteflika is in power since 1999.