A French company has found itself the target of an outpouring of angry reactions for perceived racist attitude towards Arab culture. 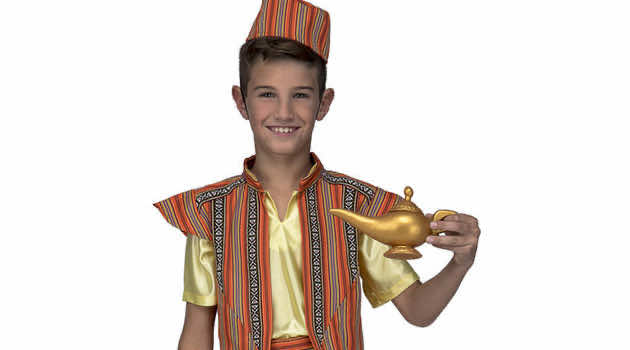 Rabat – In a rare product description, the French branch of Funidelia, a popular European costumes and cosmetic products online store, referred to its new costume for children as “costume for child Arab thief.”

The image of the advertised costume featured a smiling child model wearing a traditional yellow Saroual pant, an oriental-style wait coast, and a fez.

Giving a full Arab connotation to the product, the child model appeared to be holding what looked like a “magic lamp,” an obvious allusion to one of the most popular tales of “Arabian Nights” collection, also known as “The Thousand and One Nights.”

A customer found the stereotypical product description on February 28. He immediately brought it to the attention of Funidelia France, complaining that the company had been deliberately racist in condoning such stereotypes.

“Can someone or perhaps Google explain to us why this pops up when you search for “costume for Arab child thief?” the user asked, referring to the image.

“The title ‘Child Arab thief’ was changed yesterday. It was clearly an unfortunate human error. We want to apologize to all internet users,” the company tweeted.

In another tweet, it thanked the customer who brought up the “mistake.” It replied to the customer’s earlier question, “Thank you for pointing this out. It was an unfortunate mistake that has now been changed.”

While the company’s French branch apologized and swore that the whole incident came down to an “unfortunate” mistake that would not be repeated ever again, Funidelia’s main website appeared to suggest otherwise.

“Desert thief costume for a child,” reads the description of a similar costume advertisement on the company’s main website.

Meanwhile, Funidelia France’s outpouring of apologies were far from convincing, judging from the fury of reactions that followed the company’s responses.

“Shame! At this stage and in times like ours, this has nothing of an ‘unfortunate human error.’ It should be called Professional mistake,” one user said.

Others were less understanding. In addition to denouncing what looked to them like a deliberate lack of concern for other people’s feelings, they said the company should be boycotted until the person responsible for the description is fired.

“Unfortunate human error? Who the hell are you kidding?” one fumed.
The incident comes in heady times for reactionary identity politics in “secular France.”

Most recently, Decathlon Group, a global household name for sportswear, was forced to cancel its plans to sell sport hijab in France.

No sooner did the company make the announcement of the sport hijab plan than politicians, journalists, and “public intellectuals” caricatured the move.

Selling sport hijabs, they argued, is not compatible with France’s Republican and secular values.

Pointing out the outsized media coverage of the Decathlon affair and the disproportionate media silence on the “Arab child costume,” a number of internet users resigned themselves to the fact that some factions of the French population will never have the same voice and representativeness in public debate as others.