Algerian judges and lawyers are set on boycotting the supervision of the upcoming presidential elections.

Rabat – Algerian judges have joined the youth-led protests across Algeria, threatening to boycott the supervision of the July 4 general elections.

As members of the Algerian “Club of Magistrates,” judges and lawyers staged a strike on Saturday, April 13, at a Justice Court. The club expressed its refusal to supervise the coming general elections, expected to be held on July 4.

In a statement to the press, Merzougui Saad Eddine, the club’s spokesman and an examining magistrate at the court of justice, said, “Algeria is going through an unprecedented and historic stage it had not witnessed since independence. We are compelled to take the lead in protecting this country.”

At a rally before the Justice Court, Merzougui, announced the club’s “irrevocable boycott the supervision” of the July 4 presidential elections. The judges and lawyers, he said, “refuse to bear false testimony for elections whose results are decided in advance.”

The club also called for “the independence of the judiciary system,” “the opening of investigations into corruption” and the end of the “sanctions” suffered by magistrates.

Algerians have been protesting for over two months now. The protests started when former president Abdelaziz Bouteflika announced his bid for a fifth term after two decades in power.

Although Bouteflika has since resigned, Algerians have continued rallying across the country, demanding that Abdelkader Bensalah also step down.

Bensalah, who was appointed by parliament to run the country during the constitutional 90 days of transition before general elections, has promised “fair and transparent elections” in which he will not take part.

Algerians, however, see Bensalah’s rule  as a continuation of the Bouteflika regime. They say they will continue protesting until “they all leave,” referring to the entire political establishment that led Algeria in the two decades of the Bouteflika’s grip on power. 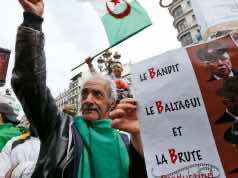