Competitors took on the last stage of the race through southern Morocco’s desert together to support charity, show solidarity, and celebrate a center’s inauguration.

By
Anton L. Delgado
-
Anton interned with Morocco World News as a news correspondent and staff photographer from March to May 2019.
Apr 15, 2019
Spread the love

Rabat – Dunes done, mountains crossed and plains covered, the 34th Marathon des Sables (MDS) was all but over. On Saturday, the last steps of the world’s longest desert race, which Morocco hosted in its southern deserts, would be for charity.

The sixth stage, nicknamed “the solidarity stage” or “the charity stage,” celebrates not only the end of the competition but the inauguration of The Solidarity Association of the Marathon des Sables’ newest center.

Created 11 years ago, the association welcomes 240 children and 40 women each year to participate in physical education and literacy classes. It also provides a space for early sports awakening and handicrafts.

The inauguration took place after the six-kilometer run, officially ending the race.

“The finish [and] the inauguration, will remind [us] what we have done during this week. All together, without competition, all equal,” French runner Pierre Serfass said right before the start of the sixth stage.

The governor of the province of Ouarzazate, Adberzak El Manssouri, joined MDS founder and race director Patrick Bauer for the inauguration.

The center took more than three years to build and cost more than €200,000.

The heads of the association hope the new center will lead to the association’s greater autonomy and sustainability and allow the organization to host more activities.

According to race organizers, solidarity and charity are a core value of the Marathon des Sables. Each year many of the runners “adventuring in the heart of the desert, dedicate their participation to a noble cause.”

While all 753 of the MDS participants wore blue during the sixth stage to show support for the Solidarity Association, runners were also representing other charities throughout the race.

Another French runner, Marc Paniandy, supported Nid’enfants, a charity focused on the development of disabled children.

“I’ve been running trail and ultra trail races for years. It’s the first time I’ll be competing in such an extraordinary race, and I’m proud to be able to help the Nid’enfants charity thanks to this participation,” Paniandy said before the start of the MDS. 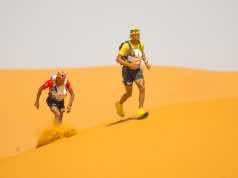