The historian Maati Mounjib said he got a warning to return to work or lose his job, but he had not been absent from work.

Rabat – The Moroccan historian Maati Monjib  said on Monday, April 22, that he would go on a hunger strike in protest of the Institute of African Studies, which threatened to fire him.

The institute, which is affiliated with the Ministry of Education, allegedly accused Monjib of being absent from work since early February.

Monjib wrote in a statement that he had received a notice from the education ministry warning him to return to work within seven days.

He noted that he was asked to sign a work resumption letter, which he refused, saying he had not been absent from work. “Signing the letter,” he said, “would mean [admitting] I was absent.”

Monjib stated that he would carry out a two-day hunger strike in the presence of activists and politicians.

Monjib said some of his colleagues at the institute are witnesses and have signed testimonials that he was at work. He said the ministry “threatened” to fire him and completely bar him from employment in the public sector.

Not his first hunger strike

Monjib, who taught investigative journalism and has links with the Moroccan Association for Investigative Journalism, commented earlier this month on the 2019 report by Reporters without Borders (RSF), which ranked Morocco 135th out of 180 countries for journalist safety.

He claimed that press freedom in Morocco now is the worst it has been since the 1990s, according to Moroccan outlet Alyaoum 24. He argued that the situation of press freedom worsened especially in 2013 with the arrest of Ali Anouzla, the co-founder of the Moroccan news outlet Lakome.

As president of the free speech organization Freedom Now, Monjib has expressed views in favor of northern Morocco’s 2016 and 2017 Hirak protests. Amnesty International reported him commenting on one of the Hirak activists, El Mortada Iamrachen, saying he was a “free thinker” convicted for “peacefully expressing his views.”

In May 2017, RSF called on Moroccan authorities to drop charges against Monjib and six other activists, who were brought to court on charges of “threatening state security” and “receiving foreign funds.”

RSF traced the beginning of the issue to 2015 following training workshops organized by Monjib together with the other six activists on investigative journalism and using an open source online app, called “Story Maker,” that supports citizen journalism.

The Index on Censorship, a nonprofit campaigning for freedom of expression, stated that Monjib has since been subject to “much police prosecution” and was banned from travelling in late 2015, for which he went on a hunger strike. 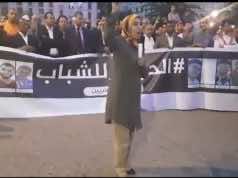 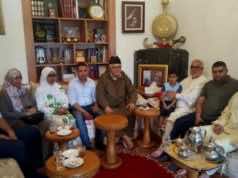