Morocco’s permanent representative to the UN said Polisario needs to remember "we are in the year 2019 and not in the 1970s." 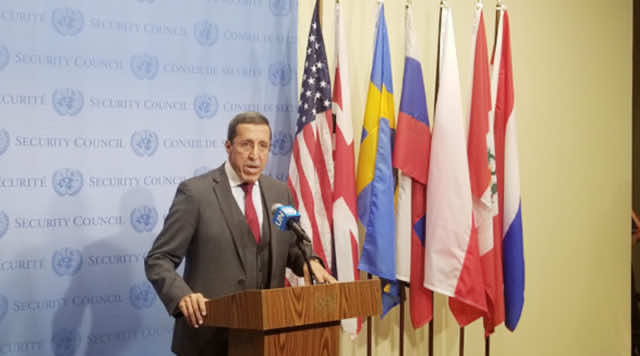 The Polisario and its mentors must understand that the world has changed and that the time of separatism is over, Morocco’s permanent representative to the UN, Ambassador Omar Hilale said on Tuesday in New York.

Hilale argued that autonomy remains the only solution to the regional dispute over Western Sahara.

“Compromise is the only way to resolve this dispute, and autonomy is the only solution we can hope for,” Hilale said at a press conference at the UN headquarters following the adoption by the UN Security Council of Resolution 2468, which extended the mandate of MINURSO for six months.

The Moroccan ambassador urged Polisario to turn the page on rhetorical discourses and ideological positions and remember “we are in the year 2019 and not in the 1970s.”

He continued, “The world has changed and the time of separatism is over.”

Hilale noted that the Security Council reiterated, in Resolution 2468, its injunction to Polisario to comply with its resolutions 2414 and 2440 and to respect its commitments to the UN Secretary-General’s personal envoy, Horst Kohler, of not returning to the Guergarate buffer zone and not moving its facilities to the zone east of the defense wall in the self-proclaimed “liberated zones.”

The reiteration of these injunctions are a new warning, from the council to Polisario, that its continued violations and provocations not only threaten regional peace and stability, as the secretary-general noted in his report, but also risk jeopardizing the political process, Hilale concluded.