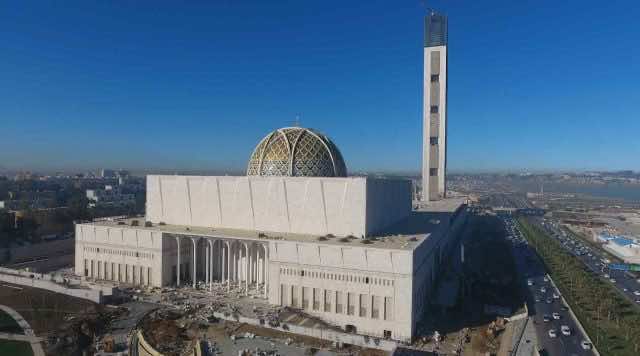 The mosque in Algeria will be the third largest in the world by area and the largest in Africa, making it bigger than the Hassan II Mosque in Casablanca.

The mosque complex covers a total area of 400,000 square meters, with a capacity for 35,000 people in the prayer hall. The space includes a park, a public square, a cultural center, a staff housing area, a religious school, a fire station, and a library.

The minaret of the Hassan II mosque in Casablanca, previously the tallest in the world, measures 200 meters. In comparison, the Great Mosque of Algiers now boasts the world’s tallest minaret, at a height of 265 meters.

Commissioned by ex-Algerian President Aziz Bouteflika, construction of the mosque depended on foreign expertise and labor. It was designed by German architects KSP Juergen Engel Architekten and engineers Krebs und Kiefer International and was built by Chinese company CSCEC. Construction started in 2012.

At an estimated cost of MAD 10.8 billion ($1.15 billion), the project is controversial.

Algeria has struggled with corruption, unemployment, and inequality. Its economy relies heavily on oil and petrol resources. The country has been trimming its spendings, especially since a drop in oil prices in 2014. Mass protests early this year led to Bouteflika’s resignation, as Algerian people demanded economic opportunities and political change, after years of discontent.

Despite the country’s economic instability, building the Great Mosque was a priority for Bouteflika.

One reason may be that the mosque would serve as a memorial to his 20-year reign. Many describe the mosque however as a megalomanic vanity project.

Larger than the Hassan II Mosque in Casablanca, it may also have symbolized Algeria’s rivalry with Morocco. The countries have complex diplomatic ties and regularly clash, particularly over the Western Sahara region. The border between the two countries has been closed since 1994.

Another motivation for the giant mosque in Algeria may have been the government’s desire to control Islamic insurgency. As a symbol of national religious identity, the Great Mosque serves to strengthen the regime.

In the late 1980s and early 1990s, the rise of Islamic organizations threatened the government in Algeria. At the time, some mosques promoted opposition to the regime, preaching the Islamist political agenda to alienated Algerians who felt the country offered no prospects.

According to Kamel Chachoua, an expert on religion at the Institute of Research and Studies on the Arab and Muslim World in Marseille, the decision to build the mosque was “a means to cut ground from under the feet of the Islamists. It’s the idea of creating a national Islam after the terror of 1990s gave [Islam] an unhinged image […],” he told BBC News.

Towering over Algiers, the finished Great Mosque is certainly a striking architectural landmark.