A leaked draft of the so-called “deal of the century” signals the birth of New Palestine, but Israel is set to be the sole victor of the Trump-brokered deal. 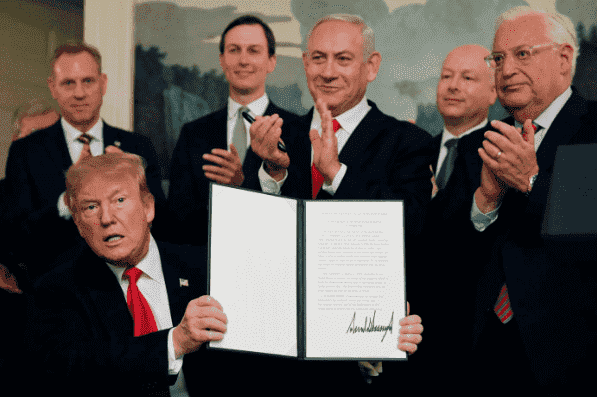 Rabat – The Israeli newspaper Israel Hayom published on May 7 a leaked draft of a future  deal between Israel and Palestine.

The document, leaked in Hebrew, unveils the main pillars of what has been labeled as the “Deal of the Century,” a Trump administration-brokered deal between Palestine and Israel.

A state named the “New Palestine” will be created in  “the West Bank and Gaza, with the exception of Israeli settlements in the West Bank,” according to an English translation, published by Turkey’s Anadolu Agency.

The alleged deal will be negotiated by representatives of Israel, Hamas, and the Palestine Liberation Organization (PLO).

The authenticity of the leaked document has not been confirmed yet by any officials from Palestine, the United States, or Israel.

President Donald Trump is expected to unveil in the upcoming weeks what he describes as the “Deal of the Century” to end the Arab-Israeli conflict over Palestine. The Trump administration’s peace plan has already been anticipated by critics to be significantly in favor of Israel.

Foreign Affairs Minister of the Palestinian National Authority, Riyad al-Maliki, responded to Trump’s anticipated plan  in a United Nations meeting on May 9, stating that the US is preparing “a surrender document, not a peace plan.”

The Secretary General of the  PLO”s Executive Committee, Saeb Erekat, has also slammed Trump’s plan. Speaking on May 3 in reaction to the plan, Erekat said that the plan “is more about dictations and not a peace agreement that may be reached through negotiations.”

The budget set for this “Deal of the Century” is estimated at $30 billion for development projects in the “New Palestine” over a five-year period.

Gulf countries are expected to cover 70% of the financial assistance “because they will be the main beneficiaries of this agreement,” said the document. Of the remaining 30%, the US will cover 20% and the EU will provide 10%.

Palestinians will also pay a yet-to-be negotiated amount of money to Israel “to defend it from foreign aggression,” since the new Palestine “will not be allowed to create an army,” said the same source.

The status of Jerusalem remains the document’s most controversial aspect.

President Trump’s decision in 2018 to move the US embassy from Tel Aviv to Jerusalem implied that the US recognizes the legitimacy of Israel’s claim over Jerusalem.