Moroccan fishermen in Agadir are selling their fish directly to the public, cutting out the middle-men who hike up fish prices in Ramadan.

Fishermen in Agadir are selling their fish directly to the public, choosing to bypass the intermediaries who usually hike up prices during Ramadan.

Boat owner Aziz Obad launched the idea in the first week of Ramadan, in a bid to take back control the price of fish and promote sales, reports Moroccan newspaper La Vie Eco.

During Ramadan, the price of seafood usually skyrockets, because the intermediaries between fishermen and consumers take advantage of high demand to speculate and increase prices.

Through this new initiative, prices for a kilogram of prawns and sole have hovered around MAD 80 and MAD 25, respectively. Now customers have access to reasonably priced seafood during the Holy Month.

Fish trucks set up shop every day in a car park close to the Agadir port, selling directly to the public.

The fish being sold comes from the high seas and was originally destined for export. It is frozen, in accordance with international export norms, reassures Obad.

The rise in fish prices during Ramadan is a recurring concern.

At the start of this year’s Holy Month, the Ministry of Agriculture and Fisheries set up a strategy to prevent a spike in fish prices, preparing a supply 500 to 600 tons of frozen fish to meet demand in Casablanca, Rabat, and Marrakech.

The consumption of fish by Moroccans is below the world average (13.3 kg / inhabitant against 19.3 kg / inhabitant worldwide). The Halieutis Plan, a commercial fishing strategy launched by the King of Morocco in 2009, aims to raise this average to 16 kg by 2020. 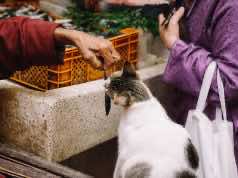