Muslims and Jews shared Iftar and prayed together at the Beth-El Synagogue in Marrakech, May 21. 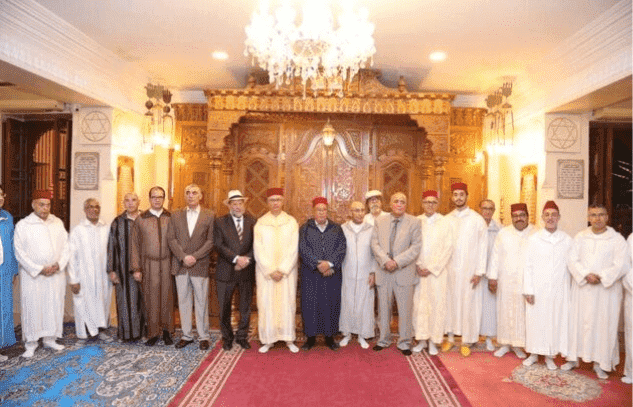 Rabat – For the holy month of Ramadan in Marrakech this week, Muslims prayed in front of the Torah, before the Jewish Holy Ark of Beth-El. This meeting of religions happened as the Beth-El synagogue hosted iftar, allowing Jews and Muslims to break the fast together on May 21.

About 220 people gathered in the synagogue whose name translates as “house of God.” In Morocco, while Islam is the official religion, all Abrahamic faiths are present.

Jews and Muslims breaking bread together during Ramadan is a result of King Mohammed VI’s policies, which actually “encourage more and more meetings between different religions and children of Abraham, the repair of old synagogues, the restoration of all these old Jewish mellahs.”

Together, the two communities share Moroccan culture. “After the prayer, we blessed Morocco and especially King Mohammed VI and his family. Then we went out for a wonderful dinner, ” said Jacky Kadoch, president of the Jewish community of Marrakech.

”A pure happiness to be together, for a dinner shared with family, which was not official,” said Jacky Kadoch. “This is the third year that we are organizing an event during Ramadan.”

“A few minutes later, there is prayer. Since ftour was in the big courtyard of the synagogue, I spontaneously proposed to the imam who was present if he wanted to perform the prayer inside the synagogue. What he accepted with a lot of enthusiasm,” said the president of the Jewish community.

The evening was peaceful. Jacky Kadoch added, “There are tensions. Sometimes, we look at the Jewish community from another angle because unfortunately there is this concern that we all experience and feel, the Palestinian question, for which we pray every day for it to be arranged, so that all world finds a space to live serenely.”