This is not the first time Algerian police have detained protesters participating in peaceful demonstrations against the interim government. 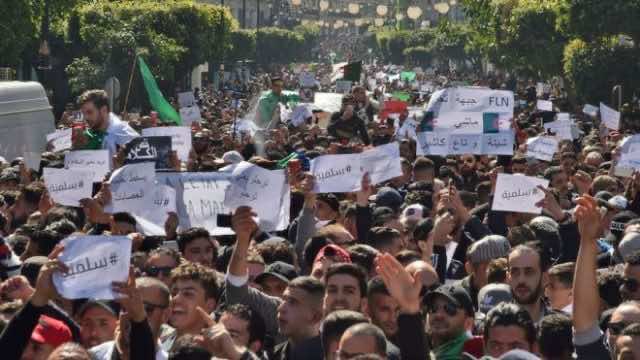 Rabat – The Algerian interim government has deployed police to crack down on peaceful protests.

The police arrested a group of nearly 30 people, consisting of mostly youth who have been leading the protest against Algeria’s interim government calling for radical change.

Police did not arrest any older people or women with children that were present at the protests.

According to AFP, the protesters condemned the arrest, emphasizing that they had not committed any offense.

Friday marks 15 weeks of protests, with demonstrators challenging elites from the era of former President Abdelaziz Bouteflika, who resigned amid unrest in April.

Addidiontally, protesters have been rallying against Interim President Abdelkader Bensalah, as well as the election scheduled for July 4.

Other arrests were made last Friday by Algerian authorities. The arrests were denounced by the Algerian political party, Socialist Forces Front (FFS).

In a statement, the party condemned the systematic repression and violence used against the protesters, who have been demonstrating peacefully.

The party also called for the release of the protesters.

Since the protests began on February 22, Algerian army chief Gaid Salah warned protesters against causing a delay in the election.

“Holding a presidential election could help [Algeria] avoid falling into the trap of a constitutional void, with its accompanying dangers and unwelcome consequences,” Gaid Salah argued.

On Tuesday, Salah echoed his previous statement, calling for “mutual concessions” amid the unrest.