Rabat – On June 13, a Turkish observation tower was hit by mortar shells in Idlib, a supposed buffer zone in northwestern Syria still under rebel control.

Turkey’s Defense Ministry has called this a deliberate attack by Syrian government forces.

Days after the attack, Syrian Foreign Minister Walid al-Moualem announced that Syria does not want to see fighting with Turkey.

“We hope that our military and the Turkish military do not fight. This is our principled stance,” al-Moualem said to reporters in Beijing. “What we are fighting is terrorists, especially in Idlib, which is Syrian territory–part of our country.”

The Turkish outpost in Idlib originally emerged under a deal with Russia in which Turkey deployed forces at various posts around the northwestern province to prevent escalations between regime and rebel forces.

Syria and Russia have been putting pressure on Turkey to assist in the disarmament and removal of the dominant HTS force from Syria’s northwest.

Syria and Russia claim that rebel violations in Idlib have prompted heightened military operations, resulting in the attack on the Turkish outpost.

Shortly before the June 13 attack, Russian news agencies reported that Russia and Turkey had successfully arranged a ceasefire in Idlib.

The establishment of a de-escalation zone in the region significantly reduced violence, according to the Russian military.

However, rebel forces in the area denied the claim, and Turkish Foreign Minister Mevlut Cavusoglu had previously said that a full ceasefire in Idlib would be impossible.

The Russian reports of a ceasefire have since been disproven, as Idlib faces mounting violence from Syrian and Russian offensives.

“The question now is: what does Turkey want to do in Syria? Turkey is occupying part of Syrian soil, and has a military presence in certain parts of Syria,” al-Moualem said in his Beijing statement.

Turkey has not announced intent to retaliate against Syria for the outpost attack. 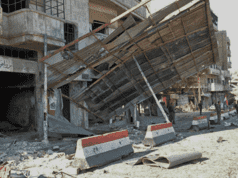