Hundreds of migrants in Libya were allowed to leave the bombed out detention center where they were held, following airstrikes which left scores dead. 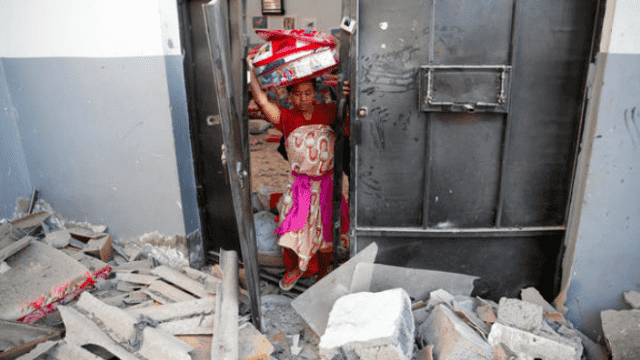 By
Ann Seymour
-
Ann Seymour is an American journalist currently based in Rabat.
Jul 11, 2019
Spread the love

Rabat – On July 2, two successive airstrikes hit the Tajoura detention center, located in the outskirts of Libya’s capital, Tripoli. Part of a large military compound, the center housed approximately 600 people at the time of the attack, including 18 Moroccans. The strikes killed at least 53 people and left 130 more injured. The survivors, still held at the center after the bombings, protested over the weekend to demand safer housing conditions.

On Wednesday, July 9, officials allowed the migrants to leave the center, some relocating to temporary aid facilities.

However, their safety and security remains in question.

“Aid organizations don’t protect us from bombs and fear,” one teenager told Voice of America as he walked away from the center.

The situation at Tajoura became so dire following the July 2 attack that hundreds of migrants went on a hunger strike to protest their conditions and demand release.

Others slept outside, fearing the building could be targeted in another attack.

Two and a half years after Libya and Italy signed a Memorandum of Understanding to curtail illegal migration into Europe, immigrants held in Libyan detention centers continue to pay a heavy price. The agreement between the two countries, and endorsed by European leaders, aimed to “stem the influx of illegal migrants.”

As a result, migrants caught by Italian authorities while trying to cross into the country by sea would be brought back to Libya and held in crowded detention centers.

Libya remains one of the most common points of departure into Europe for refugees fleeing countries in Africa and the Middle East.

These migrants have become victims trapped in the crossfire between the UN-backed General National Army (GNA) and General Khalifa Haftar’s Libyan National Army (LNA), supported by Egypt and the United Arab Emirates.

The violence in Tripoli increased in early April when General Haftar’s troops advanced on the GNA-controlled capital.

Both sides have blamed the opposition for the deadly airstrikes on the detention center, which the UN said may constitute a war crime.

The UNHCR released a statement saying “55 of the most vulnerable refugees, which included women, children, families and unaccompanied minors, were identified for relocation” elsewhere in Tripoli, then hopefully onward to a third country.

While still in Libya, the migrants remain vulnerable as the civil war continues.

“Options for humanitarian evacuations out of Libya continue to be limited,” the UNHCR said.