Spaying and neutering cats and dogs has substantial benefits for Moroccan pet owners as well as the general public. 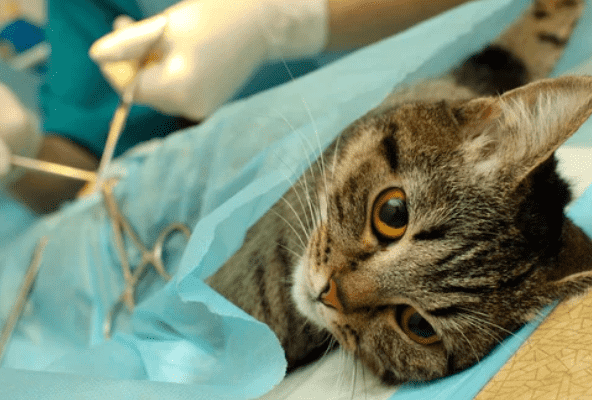 Rabat – This morning, my six-month-old cat named Doha escaped from my El Youssoufia apartment in Rabat.

Since I moved to the apartment in early June, Doha has spent hours lounging and sleeping in the large, unscreened windows, completely unsupervised. She has never expressed an interest in actually going outside—until today.

My fiance was frantic, and he raced out the door as I watched her frolic in the garden from our first-floor windows. I tried to lure her back inside with toys and food, but she wasn’t interested.

In the distance, I saw Ricky, a big orange cat with a wonky eye, creep through the barbed wire fence into the garden. He was heading straight for Doha.

Shouting obscenities, I raced around the apartment looking for something soft but heavy to throw at him should he get too close. I grabbed the rubber lid from a can of cat food and dashed back to my post.

Amine, my fiance, was outside, but the gate to the garden was padlocked and the elderly woman with the only key was nowhere to be found. After trying unsuccessfully to maneuver through the barbed wire, he scaled the gate.

When Amine landed on the other side, Ricky got spooked and ran away. I released my weapon, relieved that Doha was just seconds away from being back inside.

Read Also: Eid al-Adha and the Debate of Animal Sacrifice

Except she wasn’t. As Amine approached her, she bolted. She had no plans to come quietly, and darted under a padlocked door into a junk-filled alleyway that luckily had no exit.

After a few minutes of anxious waiting, Amine broke through the rusted door to the alley where he found Doha locked in a staredown with Sheila, the hefty blue-cream calico who had claimed the territory around our corner of the building. A notorious fighter with the scars to prove it, Sheila goes after any female cat who gets too close.

Startled by Amine’s belligerent entrance, Sheila hightailed it out of the alley. Doha, too, was about to make a run for it, but she got distracted by a sound behind her. Only because of this brief moment of vulnerability was my fiance finally able to grab her.

Today I realized that my cat was in heat.

She went outside not because of boredom or curiosity but to look for a mate; she wanted not to be free but to be impregnated. This instinct put her in danger—she could have easily gotten lost, been attacked by another cat, or hit by a car—and nearly gave my poor fiance a heart attack.

This unnerving ordeal taught us an important lesson about owning a pet: Sterilization is an urgent necessity.

All unsterilized animals are driven by the instinct to mate, but domesticated household pets face enormous risks when pursuing these natural tendencies.

Male and female cats and dogs will wander until they find a suitable partner, making them vulnerable to fights with other animals; dangerous weather conditions; cars and trains; insect bites; diseases and infections; hunger; and being unable to find their way home.

Many pet owners unfortunately lose their animals due to this instinct to mate— and to the potentially life-threatening health issues that affect unsterilized cats and dogs.

Female cats and dogs are prone to uterine infections and breast tumors, “which are malignant or cancerous in about 50 percent of dogs and 90 percent of cats,” according to the ASPCA.

“Spaying your pet before her first heat offers the best protection from these diseases.”

The sterilization of cats and dogs is recommended by all veterinarians, as it significantly improves health as well as behavior in both males and females.

Unsterilized male cats, or tomcats, regularly mark their territory with a pungent urine spray and usually exhibit aggressive behavior. Tomcats who are free to go outside the house are likely to get into fights with other males, which puts your cat in danger. They will undoubtedly mate with unsterilized females, thereby directly contributing to the overpopulation of your neighborhood.

Unsterilized female cats, known as queens, also flaunt undesirable behaviors. Most notable is the constant yowling when in heat, and they may also mark objects with urine during this period. If an unsterilized female housecat is allowed outside, she will most likely come home pregnant. If she cannot roam outside at will, her scent and noises will attract tomcats to your property.

Unsterilized female dogs will bleed when in heat, which stains carpets and furniture and requires constant cleaning. They may also endure false pregnancies during which their nipples produce milk. They will also attract intact males, and can get pregnant if left unsupervised.

Hormonal animals in the house are generally a nuisance. However, no matter how annoying they may be, these behaviors are natural responses to hormonal fluctuations. They cannot be corrected using disciplinary measures.

Sterilizing your pet will not solve every behavioral issue, but eliminating the desire to mate curtails plenty of unwanted and potentially dangerous exploits in cats and dogs.

While there are many recorded benefits to sterilization, some Muslims wonder if this procedure goes against their religion.

Some Islamic scholars, or ulama, believe that sterilization interferes with God’s creation, and that good Muslims should not even keep animals–particularly dogs—as pets. Buying and selling dogs and cats is actually considered haram by some jurists, as is spending an excessive amount of money on caring for or celebrating animals.

Alternatively, some ulama believe that animals can only be sterilized if they are going to be used for food at some point. This, of course, excludes household pets such as cats and dogs.

These pro-sterilization scholars use the reality of overpopulation to justify this reasoning.

In developed and developing countries alike, thousands of unwanted cats and dogs are euthanized in shelters and culled in the streets on a daily basis. Sterilization prevents the birth of unwanted animals that will eventually be neglected, abused, or killed. In this sense, it is permissible—and necessary.

In Morocco, where there are as many unwanted animals as there are people, street cats and dogs are suffering.

A large-scale sterilization program is the only solution to Morocco’s cat and dog overpopulation problem. By reducing the overall number of litters born—to both household pets and strays—the general population of unwanted animals will decrease.

Reducing the population of cats and dogs will greatly benefit the public. The spread of rabies and other diseases be curtailed, animal waste will be less prevalent in residential areas, and traffic accidents caused by wandering cats and dogs will decrease. Additionally, the daily nuisances such as fighting, barking, and mating that are associated with strays will dwindle.

Successfully combating Morocco’s animal overpopulation is also dependent on pet owners, which means that sterilization procedures must become more accessible. Morocco needs more veterinarians, pet-related medical expenses should be scaled to the cost of living, and pet owners must be informed of the responsibility they have to spay and neuter their companions.

A true solution must be initiated by the government, supported by the public, and bolstered by pet owners.