The commemoration is an opportunity to remember Moroccans’ contribution, resistance, and attachment to the monarchy.

Rabat – Tomorrow, August 20 marks the 66th anniversary of the King and the People’s Revolution Day, a date that carries more than just details of a local history.

Morocco marks this date annually to remember the efforts and the resistance of Moroccan people against French colonial rule.

French authorities then exiled him to Madagascar in January 1955. The colonizers, however, were not aware of the attachment and respect Moroccan people had for their Sultan.

Moments after France announced its decision to send the Moroccan Sultan into exile, tens of thousands of citizens across all regions of Morocco rallied to protest the move.

According to historical sources,  French authorities exiled the ruler for his resistance. The monarch had refused to sign a “pact of surrender,” writing French domination over Morocco into law.

French authorities exiled the King with plans to replace him with  Mohammed Ben Arafa, a sultan born in 1886.

However, the French colonizers had not been expecting wide resistance from  Morocco’s National Liberation Army.

Through their staunch resistance against the French colonial authorities, the Moroccan people, and more particularly the Moroccan Liberation movement,  showed their love and loyalty to the sultan and to their country.

Mohammed V’s exile ended after  27 months on November 16, 1955, when the sultan returned to Morocco to reign as King.

On the return of King Mohammed V to Morocco, he began negotiations with France for independence.

One year after his return, Morocco gained its independence in March of 1956.

Despite the passage of over 60 years, the new generation of Moroccans still remembers this significant date. It’s importance to Moroccan history continues to reverberate.

In 2017, King Mohammed VI said in a speech to commemorate the revolution day that the date is more than “just a landmark event in Morocco’s history. That event reverberated across the Maghreb and the rest of Africa as well.”

The King also believes that the Moroccan revolution inspired other African countries to rise up against their colonizers.

“Thanks to its spontaneous, popular character, and the values of sacrifice and loyalty underpinning it, it inspired liberation movements in the Maghreb and across Africa,” King Mohammed VI said.

Morocco’s independence from France did not mean the end for the country’s battle for sovereignty over its own territories. Morocco had to fight, first for the freedom of  Tarfaya from Spanish rule, which it gained in 1958, and then, for Sidi Ifni.

The Spanish were reticent to give up their strongholds in southern Morocco for economic reasons. Spain finally returned Sidi Ifni to Morocco in 1969, after protracted negotiations. However, this did not end Spain’s colonial hold over southern Morocco. Spain retained control over Western Sahara, intent on establishing a satellite state to maintain its grip in the region.

Led by the late King Hassan II, son of Mohammed V, the 1975 Green March served as a catalyst for the reunification of Morocco with Oued Eddahab on August 14, 1979. After several years of intense negotiation between Morocco and Spain, as well as the United Nations, Spain finally relinquished it hold over Western Sahara. Spain still holds the enclaves of Ceuta and Melilla in northern Morocco.

Morocco’s ongoing struggle for sovereignty over its territories continues to this day. Rather than the army of freedom fighters, Morocco is now mobilizing its diplomatic forces to gain support from the international community on the question of Western Sahara. For Morocco, establishing internationally recognized sovereignty over Western Sahara is the key to finally achieving a unified, whole, and independent nation. 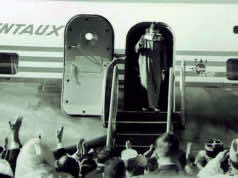 Throwback to 1953: The King and People’s Revolution Day in Morocco