The Islamic scholar was released on bail in November 2018 after he spent nearly 10 months in prison.

Rabat – Prominent Islamic scholar Tariq Ramadan has again been accused of rape, with a second woman issuing a complaint.

A fifty-year-old radio journalist claimed that Ramadan, along with a member of his staff,  raped her during a meeting for an interview on May 23, 2014, in a hotel room in Sofitel Lyon, according to French news outlet Le Point.

“It happened very quickly,  and it was an incredibly violent,” the complainant said.

She alleges that both men raped her several times.

When she threatened to file a complaint against Ramadan, the Islamic scholar allegedly said, “You do not know how powerful I am.”

The complainant claimed that she received a message from Ramadan in January, two months after his release. She says that she did not reply to his message.

She added that the two men visited her and told her in person that Ramadan tried to reach out to her.

“[They said] if I had ill-intentioned ideas they could fix that.”

Since February, the prominent Islamic scholar has been facing charges of sexual assault and rape in France and Switzerland.

He was released on bail in November 2018 after he spent nearly ten months in prison.

Ramadan has denied all accusations against him, emphasizing that he will remain in France to defend his “honor.”

“I would like you to make your decision from your conscience, not because my name is Tariq Ramadan and I’m demonised in this country,” he said in November.

Ramadan’s lawyer Emmanuel Marsigny said that his client’s release shows that all rape accusations are “lies.”

In February,  Ramadan decided to file a lawsuit against his accusers, claiming that their claims amount to defamation.

In  October 2017,  feminist activist Henda Ayari, published a tweet claiming that Ramadan is her aggressor.

However, Ayari’s narrative has changed numerous times throughout the investigation, which cast doubts on the circumstances of the case and the allegations against Ramadan. 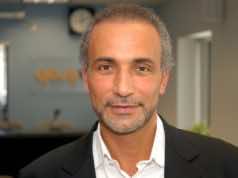