Moroccan Facebook users are widely commenting on the Al Jazeera post, calling on the media outlet to apologize to the father of the prominent leader of Hirak Rif. 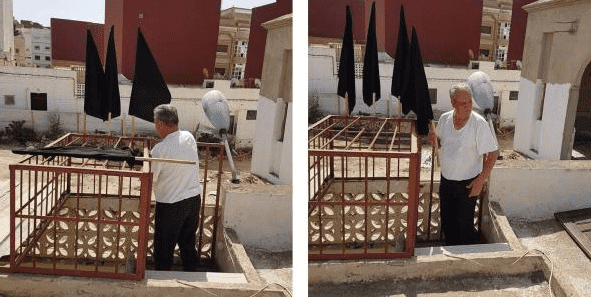 On September 4, Al Jazeera Mubasher Channel shared a post about Netanyahu facing backlash after he gave a ceremonial address at the Haram-al Ibhrami, or the Tomb of the Patriarchs. The visit of the Israeli prime minister sparked outrage among Palestinians.

The news outlet did not notice its mistake until Moroccan internet users called for Al Jazeera to apologize to the father of Nasser Zefzafi.

The photo shows Ahmed Zefzafi in Al Hoceima on his house’s rooftop.

In the photo Zefzafi is putting black flags on his rooftop for Eid Al Adha, the feast of sacrifice, which Morocco celebrated on August 12.

“The photo is from Morocco’s al Hoceima of the father of  activist Nasser Zefzafi, who received 20-year prison sentence after he called for a hospital and a university in the city.”

Another wrote, “it is better to fix the photo and provide  medical glasses to Al Jazeera employees for free.”

This is not the first time Al Jazeera has made such a mistake. In February,  Al Jazeera news channel also mistook the controversial Moroccan actress Loubna Abidar for the granddaughter of the late Iraqi president, Saddam Hussein.

Al Jazeera posted a picture of Abidar on its official Facebook page on Thursday, September 4, accompanying the photograph with general information on Hussein’s granddaughter.