The suspension of the four pro-Catalan MPs is largely seen as a point-scoring, nationalist electorate-grabbing maneuver by PM Sanchez and his socialist party. 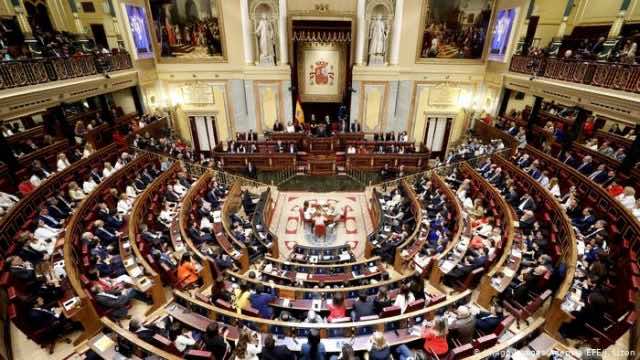 Rabat – The Spanish parliament has suspended four jailed pro-Catalan MPs ahead of critical European, regional, and local elections on September 29.

The four lawmakers were elected to their now suspended parliamentary seats in the country’s latest elections in April. They were later jailed for their role in Catalonia’s failed independence bid in 2017.

Meritxell Batet, the speaker of the Spanish Congress and member of the ruling socialist party, explained that the move was motivated by a robust legal case against the suspended MP’s conduct. They stand accused of rebellion for their separatist views and pro-independence activism on Spain’s most devise political issue: The territorial crisis in Catalonia.

“Based on all these legal elements, we have to automatically declare that their rights as lawmakers are suspended,” Batet told reporters after the decision.

As the four MPs— Oriol Junqueras, Jordi Sanchez, Jordi Turull, Josep Rull—await their trail, along with 8 other separatist activists, Spanish prosecutors are reportedly pushing for a 25-year prison sentence for each of the defendants.

They “are on trial on charges of rebellion, sedition and misuse of public funds relating to an independence referendum and subsequent unilateral declaration of independence by Catalonia in 2017,” Reuters detailed earlier today. “The Madrid government had banned the referendum and imposed direct rule on the northeastern region for a period.”

Meanwhile, the suspended MPs and their supporters see political manipulation in the decision by the Spanish parliament. They deny all wrongdoing, arguing that the only motivation is to sideline the MPs and their known opposition to the current ruling party.

The move comes at a highly sensitive moment in Spanish politics. The country’s political parties recently failed to form a coalition government following the April elections. On Sunday, Spain goes to the polls for the fourth time in four years, suggesting a climate of uncertainty and deep political fragility.

With the Spanish parliament’s pro-Catalonia voice now silenced, some analysts predict an easier route to coalition for PM Sanchez. The ruling party is expected to more easily form a left-leaning coalition with Podemos.
Previously, Sanchez extended coalition hands to Podemos, incorporating a number of the leftwing party’s sticking points in a recent policy document.

Amid heightened uncertainty about what’s next for Spain’s deeply fractured domestic politics, the suspension of the four pro-Catalan MPs is largely seen as a points-scoring, nationalist electorate-grabbing maneuver by PM Sanchez and his socialist party.

Sanchez has consistently been accused by Spanish hardliners, nationalism preaching rightwing parties, of cozying up to Catalonian independence advocates.

With the overwhelming fervor that has greeted the separatist MPs’ suspension in Spanish nationalist circles, it is to be seen how Sanchez’s Socialist Workers’ Party will fare in Sunday’s elections.